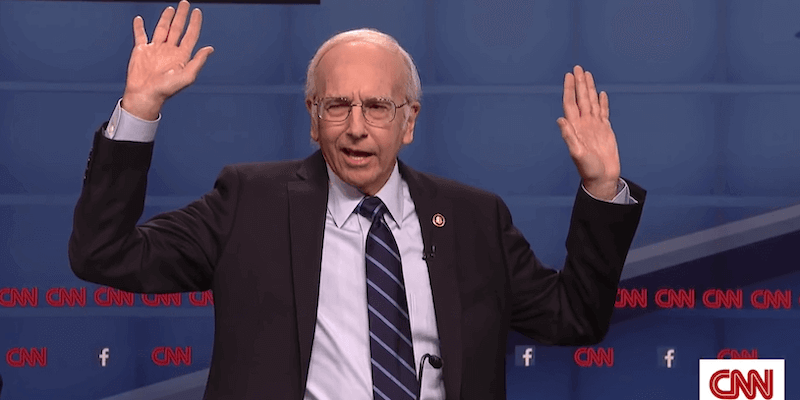 But, it has not broken the doppelgängers up.

Comedian Larry David has literally stepped into the shoes of Sen. Bernie Sanders (I-Vt.), impersonating him on Saturday Night Live.

But, even so, he says that Sanders is not his pick for president.

David told Late Show host Stephen Colbert that because of Sanders’ success, he has been keeping David busy on SNL. And although he says Sanders would be a good choice for the majority of the country, David says he is looking for a break from his gig, joking that he should “drop out.”

“If he wins, do you know what that’s going to do to my life?” David said. “It’ll be great for the country, terrible for me.”

But, David’s opinion might not matter. According to the New York Times, Sanders has remained a frontrunner throughout the Democratic primary.

“Among registered New Hampshire Democrats and unaffiliated voters who are likely to participate in the February 2020 Democratic primary, 20% currently support Buttigieg, 19% back Biden, 18% back Sanders, and 15% back Warren,” the poll states.

Regardless of politics, the two look-alikes have always gotten along. In 2016, Sanders joined David on SNL for a skit.

Soon after in 2017, they found out that they actually were distant cousins according to USA Today.

The love affair is in contrast to President Donald Trump’s criticism of SNL’s impersonation of him. Trump has been feuding with Alex Baldwin, who portrays him, for almost the entirety of his presidency.