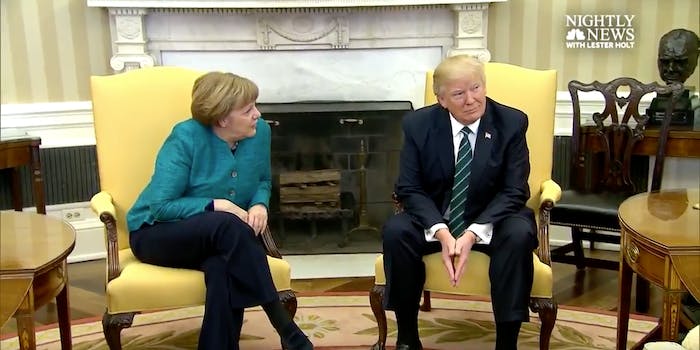 President Donald Trump, well-known for having the most respect for women of all the people in the world ever, very much accidentally failed to hear German Chancellor Angela Merkel while sitting with her for a photo opportunity.

With just more than an hour before Friday’s joint press conference between Trump and Merkel, the two world leaders sat side-by-side inside the Oval Office during a photo op. As seen from this clip from Time, the pair sat together with little exchange as cameras snapped in the foreground.

That is, until about 30 seconds into the clip, when Merkel and photographers are heard both asking Trump if he wants to take a photo of the two shaking hands.

Even when the request is being asked from both in front of and beside him, Trump just doesn’t seem to realize, or hear, or chooses not to respond to, Merkel’s offer to pose for the cameras.

It’s not a ridiculous request—we’ve seen Trump shake hands with other international leaders before, but they have just happened to be men. But despite Twitter‘s commentary, everyone has heard the president’s proclamations that he has the most respect for women, and there’s no way his failure to even acknowledge the chancellor’s voice could actually be misconstrued as sexist.

Trump didn't shake hands w/ Merkel. In his defense, he’s not used to grabbing women by their hands. #merkeltrump #MerkelmeetsTrump

You can't blame Trump for not shaking hands with Angela Merkel. He's terrified of germs. Oh… and women who are smarter than him #handshake

wow. Trump doesn't even look at, or respond to, Merkel when she asks if he wants to shake hands. https://t.co/1QvYFD64tz

The one thing #Trump does well is perform patriarchal politics flawlessly. His sexist attitude towards Chancellor #AngelaMerkel is maddening https://t.co/pAVtz271rr

It’s ok, though. Because even though Trump’s women-respecting ears didn’t hear Merkel’s question, he still shook her hand at the end of their press conference.

See, y’all. Not sexist. And Merkel didn’t even need to imitate a 30-year-old Boeing airplane to get the greeting.