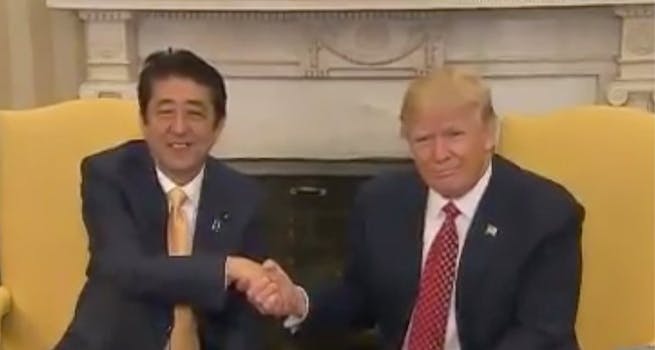 Trump has been pulling this stunt for years.

President Donald Trump‘s habit of showing dominance through extended, “pull-in” handshakes has been well-documented. Even back in 2012, when critics treated a Trump presidency like a bad joke, he was using the stunt on Mitt Romney, the 2012 Republican nominee. When Trump met Friday with Japanese Prime Minister Shinzo Abe, he naturally pulled the same thing.

And Abe was having none of it. After struggling to escape Trump’s iron grasp for roughly 20 seconds, he finally pulled away, then offered an eye roll that seemed to say, “Ow!” and also “Who is this guy?” “Presumably some type of power-executive move Trump uses to demonstrate dominance over his handshaking partners, the pull-in is Trump’s go-to handshake, regardless of whose hand he’s shaking,” Dan Amira wrote for New York in 2012.

“You can see that the pull-in turns into a brief, jerky arm-wrestle if the person on the other end decides to offer resistance.”

It makes Trump look like a bully or a weirdo, generating headlines like “Amazingly, Donald Trump still doesn’t know how to shake a hand,” but it also puts the other handshaker in a position of mutually assured awkwardness.

What could Abe do to look cool or powerful while Trump jerked his limp-looking hand to and fro? Not much. That perfect eye-roll is what saved it for him.

And the internet loved it.

The Trump Handshake goes on like a Family Guy joke. Goes on so long it gets awkward and then keeps going until it becomes funny again

Before handshake -> after handshake pic.twitter.com/PtnR6emGQU

The best part of the whole thing is that, after Twitter had been making fun of the handshake for hours, Trump decided to tweet the video from his POTUS account.

An honor to host Prime Minister @AbeShinzo in the United States. pic.twitter.com/f6TvfZ6sMj

Apparently, he didn’t see anything strange about it. Some pointed out, though, that a handshake like that would be considered even ruder in Japan than it is in America.

hard to overstate how offensive that handshake is to a Japanese person. But it's not like he'd pay attention to an etiquette brief

hard to overstate how offensive that handshake is to a Japanese person. But it's not like he'd pay attention to an etiquette brief

Between Trump’s phone call with Australia’s prime minister and this handshake, this administration’s diplomatic efforts are going extremely well.