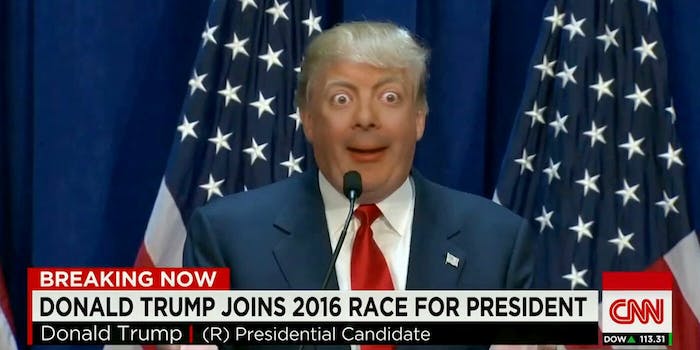 The resurgence of deepfakes comes amid government fears of video manipulation by foreign adversaries.

Deepfakes, videos in which an individual’s face is digitally placed onto another’s body, are made possible thanks to readily-available tools that utilize artificial intelligence and machine learning.

This week’s popular deepfake, produced by a creator known as PolygonGraphics, is gaining attention not only for its humorous nature but for its hair-raising appearance as well.

The mashup shows the face of Mr. Bean, a character played by British comedian Rowan Atkinson, superimposed onto Trump’s during the 2015 press conference in which he announced his presidential bid.

Mr. Bean’s face uttering some of then candidate-Trump’s more bizarre comments resulted in one YouTube viewer concluding simply: “Technology was a mistake.”

Speaking with the Daily Dot, PolygonGraphics described himself as an amateur creator. The Trump-Bean video was developed in roughly 24 hours using a free tool known as DeepFaceLab. Such tools work by analyzing hundreds or even thousands of images, in this case of Mr. Bean, in order to match them up to a target’s facial movements.

“I find many of Trump’s gestures comparable to Mr. Bean and thought that the very open eyes of Bean would contrast really well,” PolygonGraphics said.

PolygonGraphics is just one of many in a growing online community of deepfake enthusiasts. The uptick in activity also coincides with a growing concern over the technology’s potential.

Although the world was first introduced to deepfakes by university researchers, the technology has made its way to the public in the last several years. A large focus, in the beginning, surrounded placing female celebrities’ faces onto those of adult film stars. The practice became so prominent that one popular target, Avengers actress Scarlett Johansson, spoke out against on the phenomenon.

“The fact is that trying to protect yourself from the internet and its depravity is basically a lost cause,” Johansson told the Washington Post. “The internet is a vast wormhole of darkness that eats itself.”

One specific deepfake of Hollywood stars Steve Buscemi and Jennifer Lawrence, reported on by the Daily Dot last month, helped skyrocket the technology back into the mainstream. Although most deepfakes seem to opt for content over quality, the Buscemi-Lawrence video showed just how far the technology has come in terms of realism.

The deepfake revival comes just as U.S. lawmakers warn that manipulated videos could be used to disrupt the 2020 election. The Department of Defense has even gone as far as to commission researchers across the country to develop methods of detecting deepfakes.

A deepfake deployed by a foreign adversary to interfere in the democratic process has thus far not come to pass. But concerns have also been raised over the potential for governments to overreach in an attempt to protect from altered digital content.

Reddit user VillainGuy, the individual behind the Buscemi-Larwrence video, tells the Daily Dot that the deepfake community is always keeping an eye out for legislation that could potentially affect their ability to create.

“I mean, for the most part I think it’s something we all worry about from an enthusiast standpoint,” VillainGuy says.

For now, deepfakes continue to grow in popularity. As a growing number of tools and tutorials lower the bar for entry, deepfakes will likely become an even more prominent staple in our digital society.