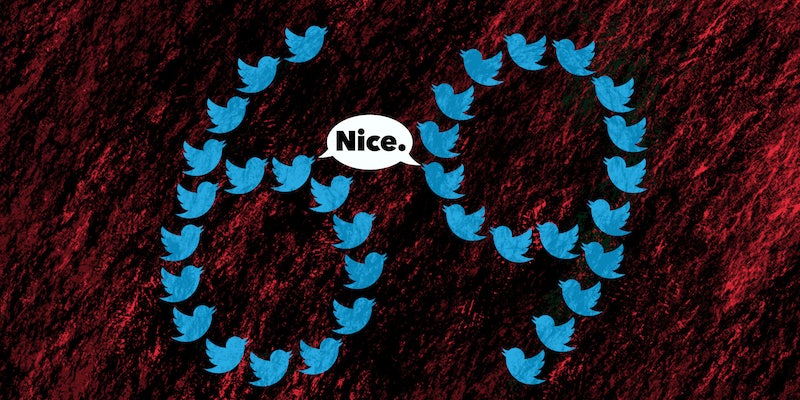 The complete history of the ‘69-nice’ meme on Twitter

The nomination of Merrick Garland was a divisive time in our nation’s history, but it became a unifying moment for Twitter.

That’s because, after the GOP refused to have a confirmation hearing for the judge, Barack Obama made a pointed note of how the American people felt about the matter. Regardless of how the people of Twitter actually felt about Garland, they all rallied around the president using, from the highest office in the land, a sex number in a big yellow font.

Eight hundred people replied, and they all replied the same way.

It came so naturally and easily to Twitter. Even famous journalists couldn’t help themselves.

But where did this meme come from? How did “nice” become Twitter’s go to reply to any tweet that features “69”—no matter the context. Of course, the easy answer is that at our core, we are forever giggling teenagers who can’t stop thinking about doing it, but like a lot of Twitter’s ingrained habits, the “nice” reflex developed organically as the site grew and formed its own language and methods of communication.

Filip Bunkens was the first person to ever tweet “69” and “nice” together, when he congratulated himself about his new follower count in September 2007. He had no idea he accidentally started a meme.

“I’m quite astonished that replying nice to 69 has become a trend,” he said. It certainly wasn’t then. There were other instances of 69 being nice, but more often than not, the tweets were referencing the weather or prices.

Then there’s this tweet, which is perhaps the most forward and direct example of 69 being nice.

Very true Bob, although it’s not positive if Bob is explicitly referring to the sex number or a golf score. (Bob did not respond to a request for comment, nor did many others, because perhaps contacting strangers about their 69-related tweets from nine years ago is a little weird.) But through the spring and summer of 2008, several users began declaring explicitly that 69 was nice.

Those tweets, however, weren’t part of the standard call-and-response we all know. Oddly, if it was Barack Obama who unintentionally shone a spotlight on the meme, possibly the very first ‘69-nice’ response happened because of him. In the run up to the 2008 election, @thewillofdc tweeted that there were 69 days until the election.

It’s worth the current iteration on how we say/pronounce “nice” in the format most likely came about thanks to South Park, which, in an October 2006 episode, features cops replying “Nice” to a student who was reporting that another kid at South Park Elementary was having sex with an extremely attractive kindergarten teacher.

Twitter, in its earliest iterations, didn’t lend itself to responding to the sex number on your own timeline. However, as the process of manually retweeting a person’s tweet and adding a comment to it became a popular method for communicating across the site, so too did “Nice”-ing some 69 tweets.

The very first instance of “nice” reply was in regards to a 69 joke, so it may not count.

And while more ’69-Nice’s cropped up, they weren’t in on the joke.

If you assume those above are merely commenting on the content of the tweets, and not on the sex number, which seems likely, then the very first instance might be here.

That was downright prescience because, over the next year, sports became the predominant way in which tweets with the No. 69 came up (excluding accounts dedicated solely to explicit content, which in Twitter’s early days, there was a great number of.)

Two moments, in particular, made for seminal ‘69-nice’ RTs, when the meme was still in its inception. Both related to announcers using the number during sporting events tweeters were watching.

Then, a few months later, it was Jim Nantz, talking about Tiger Woods at the Masters.

It should also be noted that, while South Park popularized “nice,” just as equally as important was rapper Fabolous’ tendency to add himself saying “Nice” onto his own tracks, most notably in 2010’s “You Be Killing Em.”

In fact, the number 69 is very likely to crop up in sports, at least more so than regular life, and the nice’s swiftly followed.

By the end of 2010, it had become ubiquitous, impossible to track as it spread out in directions across Twtiter big and small. But no matter how it went out from there, there’s no doubt it is considered one of the most explicit rules of the web.

It’s so ingrained in our behavior that yesterday, when President Trump concluded a tweet with “Nice”, people were bewildered about where the 69 was.

As for Bunken, who started it all, he likely didn’t see Trump’s error. He said he no longer uses the medium, finding it to be too “noisy.” For that matter, he said, he doesn’t even remember sending that tweet 10 years ago that started it all. But he does remember the mussels.

“As I live in Belgium and we have a rather great tradition of eating moules … I’m sure they were very good. Moules frites with a fresh Belgian blonde beer, can’t go wrong. ;-).”