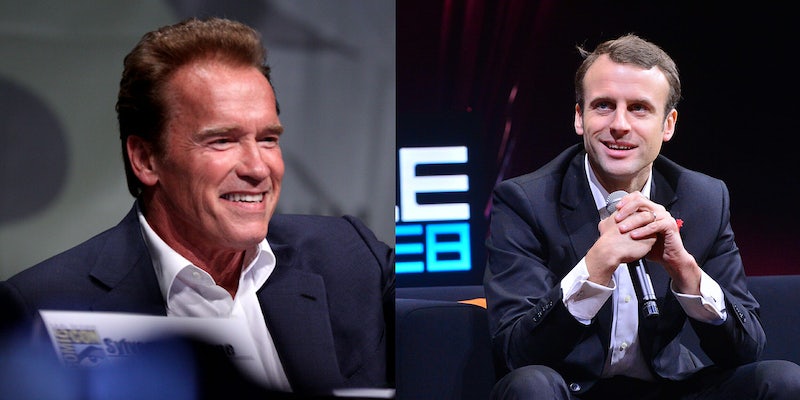 Both men have a history of trolling Trump.

Arnold Schwarzenegger, who has a long history of trolling President Donald Trump online, teamed up to with another person who has had some fun at Trump’s expense—French President Emmanuel Macron—to rip Trump for his climate decisions in a video on Friday.

The former governor of California and actor posted a video of the two men on Twitter Friday afternoon, saying that they were talking about “environmental issues.”

“I’m here with President Macron, we’re talking about environmental issues and a green future,” Schwarzenegger says in the video, before Macron comes in for the zinger at the end.

“And now we will deliver together to make the planet great again,” Macron says, echoing his mocking of Trump following the United States’ controversial withdrawal from the Paris Climate Accord last month.

I was truly honored to meet with President @EmmanuelMacron about how we can work together for a clean energy future. He's a great leader. pic.twitter.com/MSoxjIruup

Both Schwarzenegger and Macron have a bit of a history of trolling Trump.

Schwarzenegger drew Trump’s ire earlier this year as the former governor took over for Trump on “The Apprentice,” the show that gave Trump national visibility.

Trump didn’t seem to like the ratings his former show was gaining, so he lashed out at Schwarzenegger on Twitter. Their feud has been going on ever since.

It shouldn’t come as a shock that Schwarzenegger that zinged Trump on climate on Friday —he’s done it before.

Shortly after Trump announced that the U.S. was withdrawing from the Paris accord, Schwarzenegger released a video denouncing the decision.

“One man cannot destroy our progress,” Schwarzenegger said in the nearly 3-minute long video for Attn. “One man can’t stop our clean energy revolution. And one man can’t go back in time.”