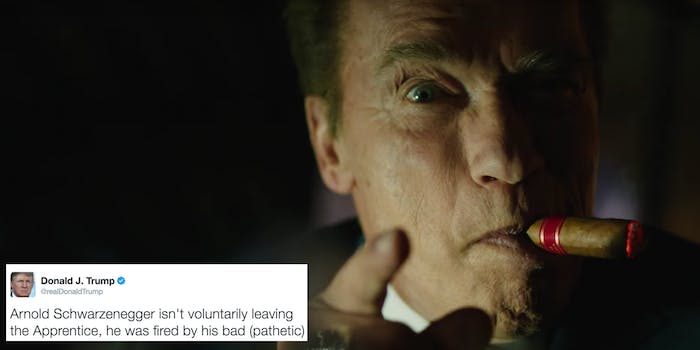 It looks like President Donald Trump may be itching to use his famous former catchphrase.

It looks like President Donald Trump may be itching to use his famous former catchphrase.

On Saturday morning, the president alleged that host Arnold Schwarzenegger hadn’t left the New Celebrity Apprentice on his own terms, but instead was fired for the show’s low ratings.

“…He was fired by his bad (pathetic) ratings, not by me,” Trump tweeted.

Arnold Schwarzenegger isn't voluntarily leaving the Apprentice, he was fired by his bad (pathetic) ratings, not by me. Sad end to great show

Trump’s two cents on Schwarzenegger leaving the production came less than a day after the new host revealed he would no longer be working on the show in an interview with Empire published on Friday. Schwarzenegger also blamed Trump’s involvement for the low ratings.

“I learned a lot, I had a great time, it was a really great opportunity … But under the circumstances I don’t want to do it again,” he told the magazine. “It’s not about the show…because everyone I ran into came up to me and said ‘I love the show… but I turned it off because as soon as I read Trump’s name I’m outta there!'”

Schwarzenegger praised NBC‘s producers, but said people boycotted the show once they learned that Trump was still credited as an executive producer.

“Even if asked [to do it again] I would decline…With Trump being involved in the show people have a bad taste and don’t want to participate as a spectator or as a sponsor or in any other way support the show,” Schwarzenegger elaborated. “It’s a very divisive period now and I think this show got caught up in all that division.”

Later that day, Schwarzenegger clarified the terms of his departure from the show in a statement, implying that Trump’s involvement in the show brought on the bad ratings.

“I loved every second of working with NBC and Mark Burnett. Everyone—from the celebrities to the crew to the marketing department—was a straight 10, and I would absolutely work with all of them again on a show that doesn’t have this baggage,” the statement read.

The pair have Twitter-sparred over ratings throughout the course of this season twice before. According to Salon, the season’s premiere garnered 6.6 million viewers and a 2.14 rating in the 18-to-49 demographic, an audience 27 percent smaller than for the show’s 2015 season premiere. And viewership has only decreased after the first month, averaging 4.1 million viewers this season.

With Trump at the hosting helm, however, ratings appeared to tank long before he became the president. According to Vulture, the 2015 season averaged 7.6 million viewers but only ranked No. 76 among broadcast series that season.

In the hour after Trump posted his tweet blaming the ratings on the new host, Schwarzenegger on Saturday replied with a jab to Trump’s use of jokes and facts.

You should think about hiring a new joke writer and a fact checker. https://t.co/SvAjuPdHfa