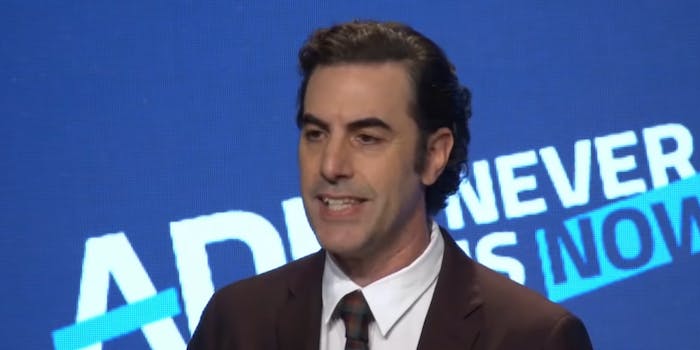 He didn't hold back.

Comedian Sacha Baron Cohen harshly criticized tech giants like Facebook, , and Twitter for giving a voice to hate speech on Thursday during a speech before the Anti-Defamation League (ADL), calling them the “greatest propaganda machine in history.”

Cohen made the remarks while giving a keynote speech at the ADL’s Never Is Now Summit.

In his speech, the comedian tore into the tech and social media industry, arguing that conspiracy theories, hate speech, and “shared lies” were being “facilitated by a handful of internet companies that amount to the greatest propaganda machine in history.”

“Think about it. Facebook, YouTube and Google, Twitter and others—they reach billions of people. The algorithms these platforms depend on deliberately amplify the type of content that keeps users engaged—stories that appeal to our baser instincts and that trigger outrage and fear,” Cohen said. “It’s why YouTube recommended videos by the conspiracist Alex Jones billions of times. It’s why fake news outperforms real news, because studies show that lies spread faster than truth. And it’s no surprise that the greatest propaganda machine in history has spread the oldest conspiracy theory in history—the lie that Jews are somehow dangerous.”

Cohen acknowledged some of the efforts the companies have made in the wake of criticism of their policies, but said they were “mostly superficial.”

He also harshly criticized a speech Facebook CEO Mark Zuckerberg gave at Georgetown University in October, where he spoke about freedom of expression.

“Zuckerberg tried to portray this whole issue as ‘choices…around free expression.’ That is ludicrous,” Cohen said. “This is not about limiting anyone’s free speech. This is about giving people, including some of the most reprehensible people on earth, the biggest platform in history to reach a third of the planet. Freedom of speech is not freedom of reach.”

The comedian, known for his role as Borat and others, did not seem to think that the companies would fix themselves, calling for them to “abide by basic standards” like other industries.

“The truth is these companies won’t fundamentally change because their entire business model relies on generating more engagement and nothing generates more engagement than lies, fear, and outrage,” Cohen said. “So it’s time to finally call these companies what they really are: the largest publishers in history. So here’s an idea for them: abide by basic standards and practices just like newspapers, magazines, and TV news do every day.”