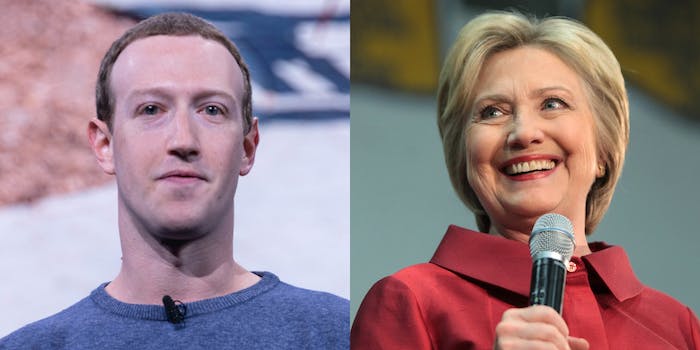 Zuckerberg and Facebook have taken a lot of heat from politicians recently.

Former presidential candidate Hillary Clinton late last week said that Facebook CEO Mark Zuckerberg “should pay a price for what he is doing to our democracy,” according to numerous reports.

Clinton made the comments on Friday while moderating an event for “The Great Hack,” a documentary that explores Cambridge Analytica, a consulting company that used data collected about millions of Facebook users without their knowledge, according to Variety.

“Mark Zuckerberg should pay a price for what he is doing to our democracy,” Clinton said, according to the news outlet. “Part of our problem, those of us who are appalled by this war on truth and this fake news which is truly surrounding us these days, is we’re not very good at combating it. It’s hard because you’re up against algorithms, plus all these other powerful forces, it’s really hard.”

“It’s not just about one election, it’s about so many of the choices that we’re facing in society right now. The use of our data to manipulate us, to make money off of us, is really one of the cardinal challenges we face… this is our information, but people seem to forget that they should demand to own it.”

Cambridge Analytica’s use of Facebook data eventually prompted Zuckerberg to testify before Congress.

Cambridge Analytica worked with both President Donald Trump’s 2016 presidential campaign and a Super PAC aligned with Trump. Wired reported that the Trump campaign did not get raw data from the firm, but instead provided analysis of data about Americans.

Clinton also addressed the criticism the company has faced about its political advertising policy.

“When Facebook is the principal news source for more than half of the American people, and the only source of news that most of them pay any attention to, and if it announces that it has no responsibility for the airing of false ads … how are you supposed to get accurate information about anything, let alone candidates running for office?” Clinton said, according to the Guardian.

Recently, Facebook has faced criticism from several lawmakers (and even its own employees) about its political advertising policy. The social media giant has said that essentially politicians can post ads about anything—even if it includes false information.

Rep. Alexandria Ocasio-Cortez (D-N.Y.) also publicly grilled Zuckerberg about the policy, and was told that she “probably” would be able to run ads that falsely claimed Republicans supported the Green New Deal.