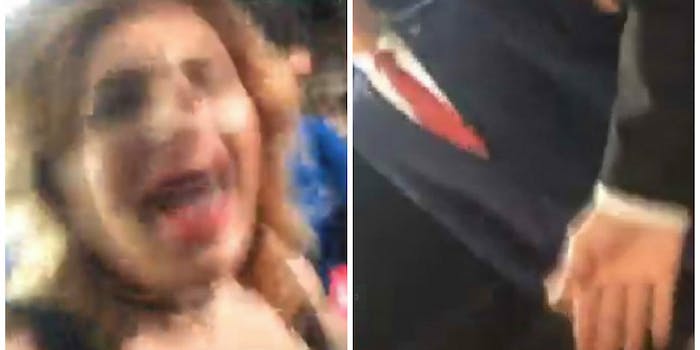 She compares the production to ISIS.

A production of Julius Caesar in New York’s Central Park has come under immense criticism because the main character who gets assassinated is made up to look like President Donald Trump. Delta and Bank of America have pulled their funding, and Donald Trump Jr. weighed in on the controversy as well.

On Friday night, the show was disrupted by protesters, and one woman, who goes by the name Laura Loomer, made a Periscope video of herself temporarily halting the production.

Somebody on stage tells her they’re not promoting violence, but Loomer basically ignores her. As the audience begins to boo, Loomer tried to shame the public theater company, Kathy Griffin (who recently pretended to behead Trump in a photo shoot), and the audience members who were watching. She also compared the production to ISIS.

Loomer was escorted out by security, but she continued yelling outside the theater. At the 1:40 mark of the video below, you can hear the audience applaud after it was announced that that show would go on. She also blamed “people like you” for the shooting of GOP Rep. Steve Scalise this week.

Loomer, 24, eventually was arrested and charged with criminal trespass and disorderly conduct after she refused to leave the area. She was later released, according to the New York Times.

As the Times wrote: “The assassination of Caesar is part of the script of the play, which was written 418 years ago by William Shakespeare; the choice to depict the title character as akin to President Trump is part of a long history of productions of the play that have used the text to explore contemporary politics. In 2012, another American production of Julius Caesar depicted the title character as President Barack Obama.”

Loomer, though, wasn’t the only one protesting on Friday night.

The play has been running since May 23 and ends on Sunday, and Friday night marked the first time the production had to be halted by a protest.