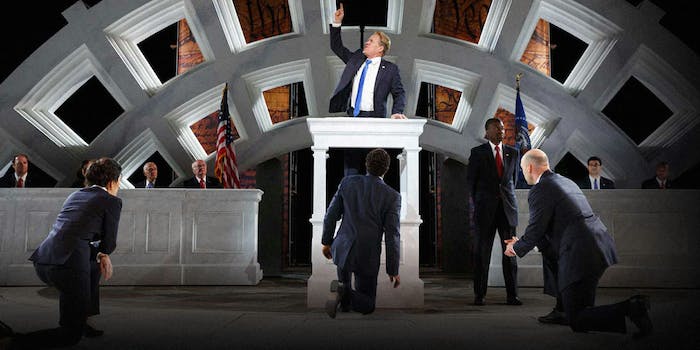 Some thought the depiction took it too far.

Delta and Bank of America, two major corporate donors of New York’s Public Theater, have pulled their funding after the theater’s production of Julius Caesar after it showed the titular character, who was modeled after Donald Trump, being assassinated.

Julius Caesar is currently playing at the Delacorte Theater in Central Park (in conjunction with the Public Theater) as part of its annual Shakespeare in the Park series, which brings free performances of William Shakespeare’s plays to the public. This production, directed by Oskar Eustis, dresses up the scene to look more modern day than ancient Rome. Its Julius Caesar (Gregg Henry) clearly invokes Trump with his blond hair, open suit jacket and long tie, and his depicted crudeness toward others including Caesar’s wife Calvernia. Dress and setting aside, it’s the same exact play many students read in school, and according to Eustis, he only changed a single line for his production. The line, spoken by the character Casca, alludes even more pointedly to Trump.

“But there’s no heed to be taken of them /  if Caesar had stabbed their mothers on Fifth Avenue, they would have done no less,” Casca said, according to Deadline’s review of the production.

The show’s third act, in which seven senators assassinate Julius Caesar, has sparked outrage from conservatives, including Trump’s son Donald Trump Jr. A Fox News article about the Public Theater’s production spread quickly online as it framed it as a New York play depicting Trump “being brutally stabbed to death by women and minorities.” A Fox and Friends Weekend segment highlighted the fact that the Public Theater is “partially taxpayer funded through the National Endowment for the Arts” and compared it to Kathy Griffin’s photoshoot where she depicted a decapitated Trump.

I wonder how much of this "art" is funded by taxpayers? Serious question, when does "art" become political speech & does that change things? https://t.co/JfOmLLBJCn

Will the @nytimes withdrawal their support of "Julius Caesar" or do they really want Trump dead. Disgusting.

In a statement, the National Endowment for the Arts said that none of its funds were used for the Public Theater’s production of Julius Caesar.

Actually, "Julius Caesar" is pretty solidly against the assassination of Caesar. Not everything depicted on stage is endorsed.

Just to be clear: There was a well regarded production of Caesar during Obama's tenure where Caesar was Obama. No one cared.

There was a reasonably well regarded Julius Caesar in 2012 featuring an Obama figure killed by Cantor and McConnell, and no one made a fuss. pic.twitter.com/804Yhy0neG

Presidents portrayed as Julius Caesar in U.S. productions: Lincoln, Reagan, Clinton, GWB, Obama, Trump. (Caesar died in all of them.)

Prior to the controversy arising over the weekend, Eustis denounced the idea that his production endorsed assassination. According to him, it served as a warning.

“Julius Caesar can be read as a warning parable to those who try to fight for democracy by undemocratic means,” Eustis wrote. “To fight the tyrant does not mean imitating him.”

However, the controversy over the Public Theater’s production of Julius Caesar has led to two corporate sponsors—Delta and Bank of America—to rescind funding of the Public Theater, which is a nonprofit, Sunday night.

“No matter what your political stance may be, the graphic staging of Julius Caesar at this summer’s Free Shakespeare in the Park does not reflect Delta Air Lines’ values,” Delta said in a statement. “Their artistic and creative direction crossed the line on the standards of good taste. We have notified them of our decision to end our sponsorship as the official airline of the Public Theater effective immediately.”

“The Public Theater chose to present Julius Caesar in such a way that was intended to provoke and offend,” Bank of America said. “Had this intention been made known to us, we would have decided not to sponsor it. We are withdrawing our funding for this production.”

We are withdrawing our funding pic.twitter.com/MlaONF82FN

Trump’s son, Eric Trump, applauded the decision along with other conservatives. Trump himself has yet to address the controversy.

Thank you @Delta and @BankofAmerica. This was the right thing to do… https://t.co/COOfg9QqUq

Kudos to @Delta for pulling $$ from "play" portraying assassination of @POTUS. No one should sponsor crap like that! https://t.co/J2SeusqKyz

Others saw the move as a threat to theater and creative expression as well as a contrast to the creative freedom being portrayed on the Tony Awards, which aired Sunday night.

Disappointed in @Delta for turning its back on free expression. I've flown many thousands of miles with you. No more https://t.co/wLXaDef7Nr

Delta and Bank Of America have pulled funding from the Public Theater due to a creative interpretation of Shakespeare. Act accordingly.

I know we're all paying attention to the Tonys (and we should continue to!), but this is an incredibly scary threat to theatre.

Performances of Julius Caesar are set to continue until the show closes on June 18.