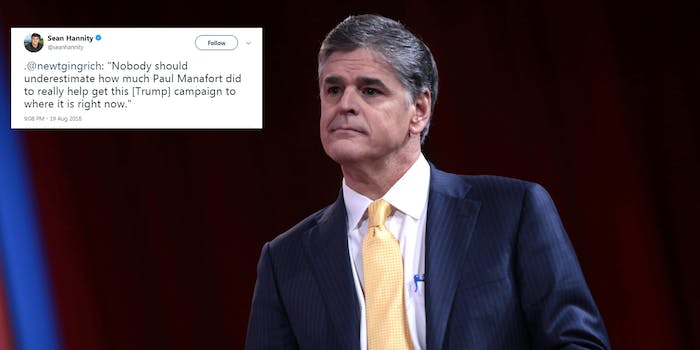 Fox News pundit Sean Hannity is known for his unabashed support of President Donald Trump, but that cheerleading has already come back to haunt him.

Hannity’s feelings toward Trump were no different in August 2016, when he tweeted a line from an interview with former House Speaker Newt Gingrich that reinforced “how much” now-indicted former Trump campaign chairman Paul Manafort did to “help” Trump get elected.

With the news on Monday that Manafort, along with his associate Rick Gates, were indicted on several counts–including conspiracy against the United States, conspiracy to launder money, acting as unregistered agent of a foreign principal, among others–Hannity’s tweet has not aged well as the probe headed by Special Counsel Robert Mueller is expected to continue and grow in the coming months.

“[email protected]: ‘Nobody should underestimate how much Paul Manafort did to really help get this [Trump] campaign to where it is right now,’” Hannity tweeted in August 2016.

While Monday’s indictments did not mention any “collusion” between Russia and the Trump campaign, some (mostly Trump critics) speculate that the charges brought up against Manafort and Gates will be used as leverage against the two men in order to get more information that may be helpful to the probe.

If Manafort was as helpful to the campaign as Gingrich implied to Hannity, it appears that he may have information that may be interesting to Mueller and his team.