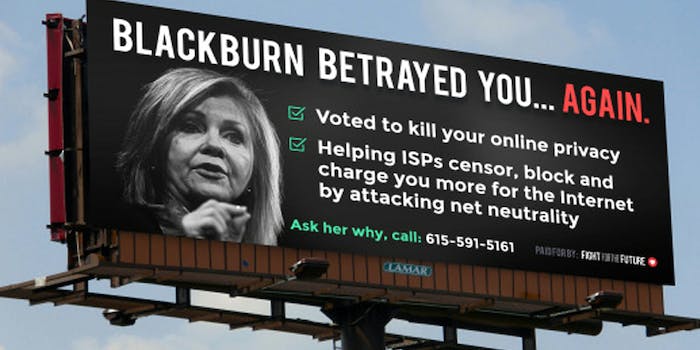 'Internet users are pissed off and paying attention.'

An internet advocacy organization behind the historic internet-wide protest to save net neutrality last week said they will soon begin targeting members of Congress with billboards and a scorecard highlighting their stances on the issue.

Fight for the Future, one of several groups that organized the Internet-Wide Day of Protest to Save Net Neutrality, announced on Tuesday that it has raised more than $50,000 that it will use to erect billboards pointing out specific members of Congress and their support of the Federal Communications Commission’s plan to dismantle net neutrality.

“Internet users are pissed off and paying attention,” Evan Greer, campaign director of Fight for the Future, said in a statement. “Any lawmaker that stands idly by and allows the FCC to gut these basic free speech protections that people from across the political spectrum overwhelmingly support will be seen as an enemy of the Internet and an enemy of free speech. These billboards, and the scorecard, are just the beginning.”

Net neutrality is the principle that internet service providers (ISPs) must treat all data delivered to customers equally. The FCC protected net neutrality with its passage of the 2015 Open Internet Order, which reclassified broadband providers as utilities (like electricity service) and established regulations that the FCC now aims to overturn.

A mockup of a billboard released by Fight for the Future shows Rep. Marsha Blackburn (R-Tenn.) that says “Blackburn Betrayed You… Again” with two check boxes that say Blackburn “voted to kill your online privacy” and is “helping ISPs censor, block and charge you more for the internet by attacking net neutrality.” The billboard also includes a number to contact Blackburn.

Earlier this year, President Donald Trump signed a bill that wiped away FCC privacy rules for broadband providers, allowing ISPs to collect and sell browsing histories, health and financial data, app usage data, and the contents of emails and messages, among other information.
Following the vote, Blackburn—who chairs the House subcommittee that oversees the FCC—said that “[Consumer privacy] will be enhanced by removing the uncertainty and confusion these rules will create.”

Blackburn has also been a long-time opponent to net neutrality. In 2015, she reintroduced legislation to block net neutrality, accusing it of being an Obama administration attempt at regulating the internet like a “1930s era public utility.”

The scorecard allows users to search for representatives in their state and separates them into groups for and against net neutrality.

The campaign to erect billboards and create a government scorecard comes on the heels of the Internet-Wide Day of Protest to Save Net Neutrality—a massive protest that brought together more than 100,000 websites, bringing attention to the FCC’s attempt to revert ISPs to a less strict form of regulation.

By doing so, opponents argue that ISPs will have free reign to slow down certain websites on the internet in favor of other ones. For example, without net neutrality, an ISP could slow down Netflix for a customer and speed up a streaming service they have launched.

Fight for the Future has launched a page for people to donate to their billboard cause. You can read more about their plans here.