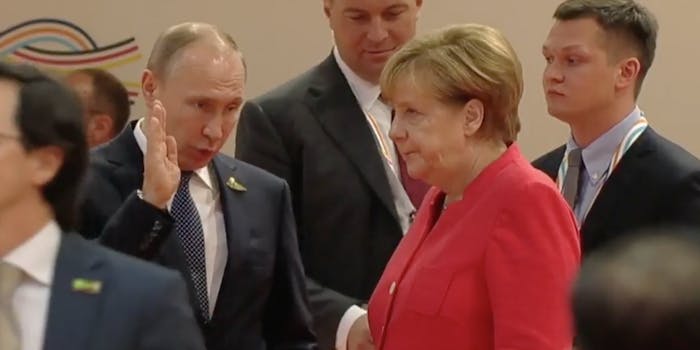 A lot happened on Friday.

There’s been a lot happening at this weekend’s G20 summit in Hamburg, Germany. But German Chancellor Angela Merkel’s epic eye roll might be the best meme-worthy event to happen so far.

A GIF is circulating of Putin appearing to explain something to Merkel while raising his hand, but her eye roll is one that is sure to become an internet staple.

It is unclear what exactly they were talking about. But if you happen to read lips, here’s a video of the interaction:

Sign language at #G20.
A good place to hide your spare key? High jump? Vertical take-off?
What are #Merkel and #Putin discussing? pic.twitter.com/fW1JXhrMtJ

While Merkel’s eye roll is going viral, President Donald Trump‘s meeting Russian President Vladimir Putin is the big news of this year’s G20. The meeting between the two leaders was highly anticipated, as the two countries continue to squabble over whether or not Russia impacted the outcome of the 2016 presidential election and both Congress and intelligence communities are investigating if Russia worked with members of Trump’s presidential campaign.

The meeting lasted for more than two hours, according to reports, but was only scheduled to last 30 minutes. There was also no masculinity-testing handshaking like the ones that have happened when Trump met with other foreign leaders.

“We look forward to a lot of very positive things happening for Russia, for the United States and everybody concerned,” Trump said.

The two leaders reportedly discussed creating a more positive relationship between the two countries and the U.S.–Russia ceasefire agreement regarding Syria, according to the Associated Press. Secretary of State Rex Tillerson later said Trump confronted Putin about Russian cyberattacks during the 2016 election. Putin denied carrying out the attacks, and Trump decided to “move forward” with other topics of conversation, according to Russian Foreign Minister Sergey Lavrov.