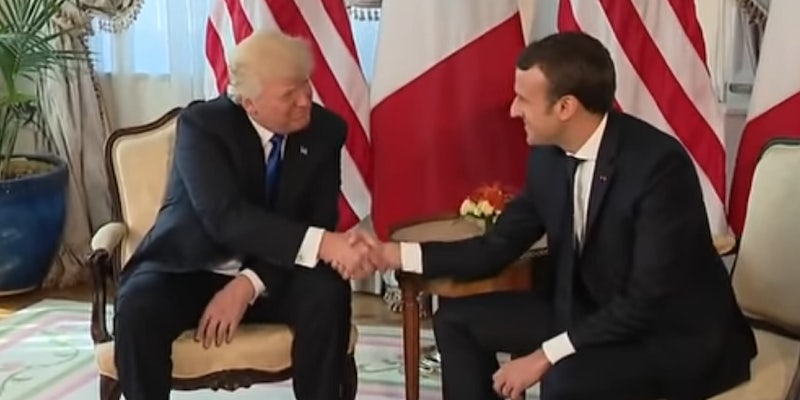 How do you say 'awkward' in French?

It looks like world leaders are starting to catch on that you have to strike first—and hard—when you shake President Donald Trump’s hand.

Trump’s handshakes have drawn some serious scrutiny since he’s taken office. To put it simply—they are intense.

But much like Canadian Prime Minister Justin Trudeau, it appears newly-elected French President Emmanuel Macron figured out how to block the Trump-shake: Go in hard.

Trump and Macron met for the first time at the U.S. ambassador’s residence in Brussels on Thursday.

Trump first congratulated Macron on his “tremendous” victory that was being talked about “all over the world.”

As Trump spoke, Macron sat silently, hands slightly fidgeting, waiting for what was to come: the handshake.

But Macron wasn’t messing around.

The shake went on for a while, with Macron clearly leading it. They stared at each other for a few moments as Macron grasped Trump’s hand even tighter.

The White House pool report of the handshake described it this way: “[E]ach president gripped the other’s hand with considerable intensity, their knuckles turning white and their jaws clenching and faces tightening.”

If Macron’s handshaking skills are indicative of his ability to govern, France should be confident they made the right choice in their election.

You can watch the latest installment of Trump’s epic handshake wars below: