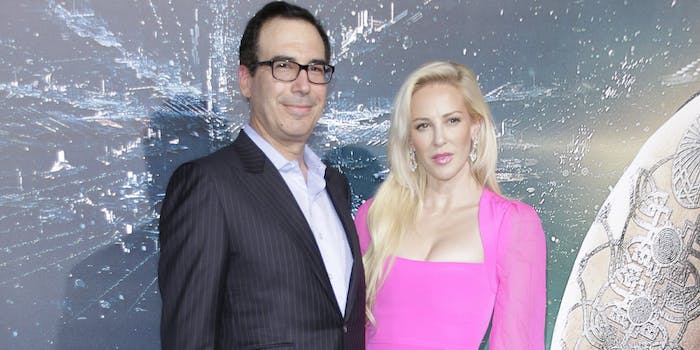 Louise Linton, wife of U.S. Treasury Secretary Steven Mnuchin, encapsulated the divide between America’s rich and everyone else by mocking a critic for having less money than she does.

Linton, a 36-year-old actress, posted a photo on Instagram of herself and Mnuchin exiting a United States government airplane along with the caption, ““Great #daytrip to #Kentucky!” She also included the hashtags #nicest #people #beautiful #countryside, and tagged some luxury brands: #rolandmouret, #hermesscarf, #tomford, and #valentino.

Jenni Miller, whom the New York Times identified as a 45-year-old mother of three from Portland, Oregon, responded to Linton’s post: “Glad we could pay for your little getaway. #deplorable.”

Mnuchin and Linton were in Kentucky to lobby members of Congress to reform the federal tax code, one of President Donald Trump’s impending prerogatives. Mnuchin told the Washington Post that he personally paid for Linton’s travel to the Bluegrass State.

Rather than brush aside Miller’s remark, however, Linton launched into a 162-word, emoji-laced, passive-aggressive tirade in which she mocked Miller for not being the wealthy wife of a former Goldman Sachs partner:

cute! 😘 Aw!! Did you think this was a personal trip?! Adorable! Do you think the U.S. govt paid for our honeymoon or personal travel!?! Lololol. Have you given more to the economy than me and my husband? Either as an individual earner in taxes OR in self sacrifice to your country? I’m pretty sure we paid more taxes toward our day “trip” than you did. Pretty sure the amount we sacrifice per year is a lot more than you’d be willing to sacrifice if the choice was yours. 💪😘 You’re adorably out of touch. 😍 Thanks for the passive aggressive nasty comment. Your kids look very cute. I know you’re mad but deep down you’re really nice and so am I. Sending me passive aggressive Instagram comments isn’t going to make life feel better. Maybe a nice message, one filled with wisdom and humanity would get more traction. Have a pleasant evening. Go chill out and watch the new game of thrones. It’s fab!

Speaking with the Times, Miller said, “If she hadn’t made her account private, I would have written back with a very snide Marie Antoinette joke.”

“I think my post was just five or six words,” Miller continued, “and she had to go on basically a rant about it to make herself look more important and look smarter, better, richer—all those things.”

Mnuchin, 54, is worth an estimated $300 million, according to Forbes, thanks in part to the sale of subprime mortgage lender IndyMac, which Mnuchin partially owned, to CIT Group for $3.4 billion. Mnuchin married Linton, his third wife, in June, in a ceremony officiated by Vice President Mike Pence.

Last year, Linton self-published her memoir, In Congo’s Shadow: One girl’s perilous journey to the heart of Africa, which the book’s summary describes as the tale of “an intrepid teenager who abandoned her privileged life in Scotland to travel to Zambia as a gap year student where she found herself inadvertently caught up in the fringe of the Congolese War.”