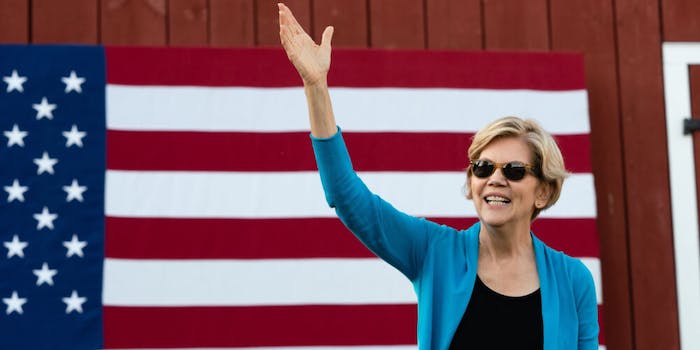 Why are people doubting that Elizabeth Warren was fired for pregnancy?

Retired teachers from the school backed up her story.

News reports are claiming that Elizabeth Warren lied about being let go from her first teaching job in 1971 for being pregnant after records from the time emerged that appear to contradict that claim.

According to the story Warren has told many times on the campaign trail, at the end of the 1970-1971 school year she was visibly pregnant, and the principal at her school, “showed [her] the door.”

Several outlets, including the Washington Free Beacon, recently cast doubt on this story this week, sharing a 2007 interview in which she recounts things differently.

“My first year post-graduation I worked in a public school system with children with disabilities. I did that for a year, and then that summer I didn’t have the education courses, so I was on an ‘emergency certificate,’” said Warren in the interview. “I went back to graduate school and took a couple of courses in education and said, “I don’t think this is going to work out for me. I was pregnant with my first baby, so I had a baby and stayed home for a couple of years.”

According to CBS News, this interview in combination with local news reports at the time saying that Warren had resigned to raise a family, and school board minutes that show she was offered a job that April, are being used as evidence that she lied about being let go for her pregnancy.

The story has made its way up to the White House, as Kellyanne Conway tweeted about it.

Warren has faced criticism for misrepresenting her background before, most notably her Native American heritage.

In an interview with CBS, Warren said that becoming a public figure when she was elected to the Senate in 2012 caused her to “open up” about different parts of her life she’d previously kept private.

She further explained that when she was offered a job for the following school year, she was still hiding her pregnancy, and it was later when the principal “showed her the door.”

Responding to criticisms that she has lied about the end of her employment at Riverdale Elementary, Warren said to CBS, “When someone calls you in and says the job that you’ve been hired for the next year is no longer yours. ‘We’re giving it to someone else,’ I think that’s being shown the door.”

Women online agreed with Warren’s story, even as it faced criticism.

If you have trouble believing that Elizabeth Warren experienced pregnancy discrimination because no one wrote down "Fired because pregnant," you are going to be floored when you learn about the experiences of…. any other human woman you know.

Did people really think there would be official notes from a Board of Education meeting that said “We fired Elizabeth Warren for being pregnant”? Of course they claimed she resigned. This kind of sexism is insidious and systematic, and it covers its own tracks.

Two retired teachers who worked at Riverdale Elementary at the same time as Warren told CBS that while they weren’t aware of anyone being explicitly fired for pregnancy, there were no protections for pregnant teachers, and if you were pregnant, “they kind of wanted you out.”