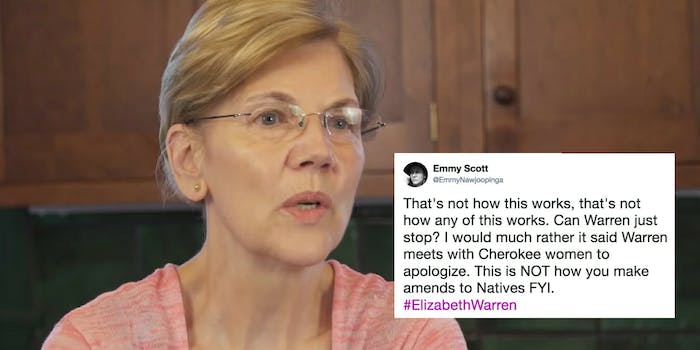 Blood quantum has long been used to discriminate against Native Americans.

Massachusetts Sen. Elizabeth Warren might have attempted to quell criticism from the right yesterday when she released her DNA analysis, which “strongly supports” that she has Native American ancestry. However, Indigenous American Twitter has fired back at Warren’s mincing of her identity, explaining that Warren’s DNA test is doing more harm for the Native American community than good.

“Seriously, can we talk about how Warren did the biggest disservice to Natives by doing this?” wrote Emmy Scott, a law student who is from the Ho-Chunk, Spokane, and Arikara tribes. “It’s just upholding the idea that DNA has anything to do with being Native. Kinship ties mmkay!”

Many took issue specifically with this perpetuation—that nativism is blood alone—and how it affects people’s general understanding of what it means to be a Native American. For many, it goes so far beyond what DNA analysis shows, and into how they lead their lives and practice their cultures daily.

“Indigenous Nationhood does not come from a test tube. It comes from active community involvement. From an unyielding connection to land. From your ancestors having sheltered your nation’s resistance leader. From Ceremony, from water, from ancient songs,” another Twitter user, SaltyLilOjibwe, shared. “It’s a responsibility.”

That's not how this works, that's not how any of this works. Can Warren just stop? I would much rather it said Warren meets with Cherokee women to apologize. This is NOT how you make amends to Natives FYI. #ElizabethWarren https://t.co/rcm18tiLiU

Seriously, can we talk about how Warren did the biggest disservice to Natives by doing this? It’s just upholding the idea that DNA has anything to do with being Native. Kinship ties mmkay! #ElizabethWarren https://t.co/PARZDa6iEq

Indigenous Nationhood does not come from a test tube.
It comes from active community involvement.
From an unyielding connection to land.
From your ancestors having sheltered your nation's resistance leader.
From Ceremony, from water, from ancient songs.
It's a responsibility.

Native American DNA (despite the shakiness of DNA tests in general to prove “race”) does not mean you are “Native American.” Indigenous people are nations that select & determine their own membership, based on their own customs not DNA tests. No one claims Warren. https://t.co/ol7L3UslzT

DNA tests do not make one Native. We are so much more than that. Natives belong to over 570 different tribes in the U.S. alone. No DNA test can point toward what tribe(s) you’re from. Each tribe has its own language, culture, history and system of kinship.

For several Native Americans on Twitter who sounded off, proving their heritage is much more involved than buying a 23andMe test. This exact practice, blood quantum—the measurement of Native American blood in a person—has been used to discriminate against the general Native population for acceptance into certain tribes. As NPR’s Code Switch podcast puts it, it can affect “identity…relationships and whether or not you—or your children—may become a citizen of your tribe.”

Currently, the Navajo Nation requires minimum 25 percent “Navajo blood,” while the Turtle Mountain Band of Chippewa Indians requires minimum 25 percent any “Indian blood” with a combination of Turtle Mountain. As Code Switch pointed out, depending on your and your partner’s blood quantum, your children may not qualify to be a member of your tribe.

About @SenWarren's DNA test & #NativeTwitter saying she's not a "real Native":
Ironically the majority of Native tribes broadly support ideas of blood quantum as proof of being Native. So fears of white people considering us a "race" is the pot calling the kettle black.

Kim TallBear, an associate professor at the University of Alberta and the Canada research chair in Indigenous peoples, technoscience, and environment, said Warren’s DNA test privileged DNA companies with “settler-colonial definitions of who is Indigenous.” TallBear implied that Warren’s whiteness privileged her to define and control the identity of others, and that she’s taking advantage of the U.S. public’s ignorance of tribal citizenship to rewrite what it means to be Indigenous.

“Whether Elizabeth Warren or Donald Trump or 23andMe’s Carlos Bustamante know it or not, they are making settler-colonial claims to our cultural and biological patrimony yet again,” TallBear wrote as part of her full statement.

Warren’s DNA reveal might have been an attempt to make President Trump pay up the $1 million he hypothetically promised to a charity of her choice, but she may now need to do more damage control with Native American communities than she had initially suspected.