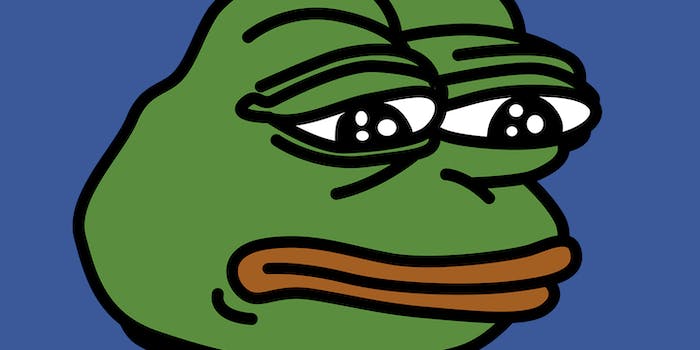 It's the latest victory for the artist behind the cartoon.

Daily Stormer, a website by and for neo-Nazis, has purged Pepe the frog images from its website amid copyright claims by the meme’s creator, Motherboard reports.

It’s the latest victory for Matt Furie, the artist behind Pepe, who since 2017 has been fighting with far-right trolls to reclaim his cartoon and prevent it from being used as a hate symbol. But the fight with the Daily Stormer didn’t come easily.

Louis Tompros, an intellectual property lawyer on the Pepe case, told Motherboard that getting the Daily Stormer to comply with copyright notices was “a bit of an annoyance.” That’s mostly because the website itself, due to its white supremacist content, struggles to stay on any server for very long.

“The problem was that they would be up and then their entire site will be down and move somewhere else and reorganize,” Tompros said. “The reason it takes us longer on this and some of the others is the [way] their website moves around a bunch.”

But after lawyers sent Digital Millennium Copyright Act notices to Frantech Solutions, the company hosting the Daily Stormer as of July 2, the majority of the Pepe images were finally taken down. According to Motherboard, there were more than 40 articles featuring the cartoon to start, and all but four have been removed, modified, or replaced.
Next, Furie’s team is working on getting Pepe removed from Alex Jones’ Infowars and Amazon, where vendors use the image on white supremacist paraphernalia.
In May, Motherboard discovered by way of internal Facebook documents that the social network had banned Pepe images used in the “context of hate.” Other organizations including Apple and the Overwatch eSports league have restricted Pepe use on their platforms.
READ MORE: