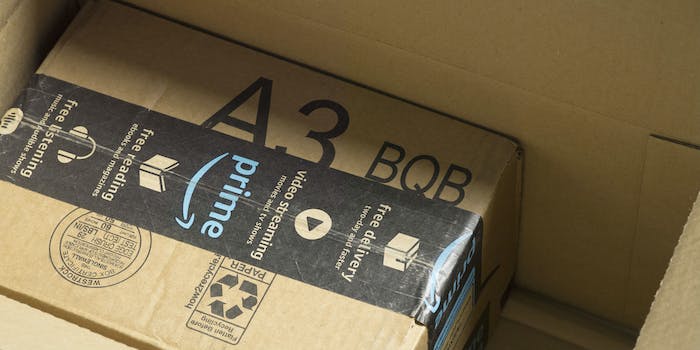 This isn't a good look.

Amazon is being accused of continuing to sell white supremacist paraphernalia, the Verge reports.

In 2015, the retail giant issued a ban on all Confederate flag merchandise following the mass shooting of nine African Americans in a church in Charleston, South Carolina, by killer Dylann Roof, who was apparently inspired by the imagery. Despite the ban, Confederate flag and Nazi merchandise is still being sold on Amazon’s platform by third-party sellers, according to a new study

The study, led by advocacy groups the Partnership for Working Families and the Action Center on Race & the Economy, pointed to items representing hate groups for sale on Amazon’s website. Among the items found were swastika pendants, a German SS hat, stickers, decals, and pendants—as well as Pepe the frog-related merchandise.

Horrifyingly, many of these items—including toys, action figures, and clothing—are being targeted to children. The research even turned up an infant onesie with a burning cross on it.

In response to the report published Friday, Amazon issued a statement defending its no-tolerance policy for hateful products. The policy states that any items promoting or glorifying “hatred, violence, racial, sexual or religious intolerance” or promoting “organizations with such views” are banned from its platform.

“Third party sellers who use our Marketplace service must follow our guidelines and those who don’t are subject to swift action including potential removal of their account,” a spokesperson said.

That’s all well and good, but with thousands upon thousands of third party sellers, the company seems like it’s playing a game of whack-a-mole to squash sellers promoting this type of merchandise. The report’s findings show that Amazon just isn’t working hard enough to weed out hateful products when it’s more crucial than ever.

Amazon has responded to public pressure in particular instances and for particular parts of its empire, but has failed to create internal systems that effectively prevent hate groups from using its platforms to propagate their ideas or that stop the spread of hate symbols via its online store. In a moment when hate groups and racist violence are on the rise, Amazon’s failure to effectively block hate organizations from the use of its platforms to spread violent ideologies is a dangerous choice.

With any hope, the bad publicity will put added pressure on Amazon to come up with a better solution to this continuing problem. Ultimately, only time will tell.