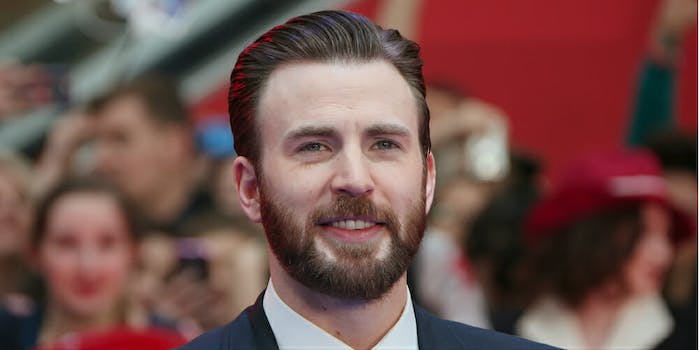 Do politicians really need another platform?

Chris Evans is no stranger to politics.

The 37-year-old actor, best known for his portrayal of Steve Rogers in Marvel’s Captain America franchise, has been vocal about his political views for years. His Twitter page tends to be a melting pot of snarky political posts, in addition to dog posts. But Evans recently took a much bigger step into politics with the development of his new “secret, non-partisan civic engagement” project, reportedly dubbed “A Starting Point.” As more details come to light, many fans are scratching their heads.

Evans’ newest venture was announced following the discovery of a leaked video. “I just thought ‘why isn’t there a place I can go to hear both sides of an issue in a succinct way that I can trust,” Evans said in the clip, per CNN.

He explained that politicians being interviewed can skip questions that they don’t like, and re-do any answers that don’t come out just right.

You know, because politicians never get a platform to talk about their political opinions. Evans called the site a “one-stop-shop for simple, digestible information from the people that know best.”

Do politicians know best though? Just because a politician yells the loudest does not make them more of an expert than researchers or scientists.

Links to further information will reportedly be accessible with each video, where viewers can find out more if they so choose. The goal of the site, according to the video, is “to provide succinct answers to common questions by presenting both the Democratic and Republican point of view on dozens of issues across the political landscape.”

That sounds innocent enough, but people couldn’t help but point out the many flaws in its conception. Not only is it giving voice to people who already have a massive platform, but it lends credence to the balance fallacy. This idea, which used to be very common in journalism, hinges on the idea that both sides of an argument should always be heard. This seems like a great idea until you consider ideas like white supremacy and climate change. On one side of these arguments, people commonly have extensive expertise and research to back them up. On the other, there are opinions. These two sides do not deserve to be treated with equal weight.

There is also a definite flaw in interviewing inherently political people for a venture purportedly aiming to lessen polarization.

People were quick to point out some issues they had with Evans’ project online.

“Can’t wait to have my existence and basic humanity framed as a ‘debate’ in yet another online venue,” one commenter said. “Hard pass,” another commenter added. “We have way too much ‘both sides’ as it is. It turns out, sometimes one side is right and one side is wrong. Checks notes…kids in cages is wrong, ripping healthcare from millions is wrong, stoking racism is wrong. Skip the both sides crap.”

Hard pass. We have way too much “both sides” as it is. It turns out, sometimes one side is right and one side is wrong. Checks notes…kids in cages is wrong, ripping healthcare from millions is wrong, stoking racism is wrong. Skip the both sides crap.

Hey, @ChrisEvans. I love you. You're awesome. This ain't it. Have a nice day, Bruv.

Other commenters felt that the idea had potential, as long as it was approached correctly.

There are sides to policy. There are not sides to facts. If he sticks with policies that's great mainly because it will show that the right doesn't have policy for immigration or healthcare or climate change. If it tries to "both sides" facts, then it's hot garbage.

Chris, Will there be fact checking? Because without it, politicians are just going to lie and IMO and experience, the GOP lie constantly.

Everyone else pretty much stuck to jokes about very unbalanced viewpoints. “9/11 was both good and bad,” one commenter joked.

There were also those who supported Evan’s venture. They took to Twitter to compliment the effort, lauding it as the perfect first step.

People are really mad at @ChrisEvans for this but they are all wrong. This isn’t for seasoned activists or those that have a lot of info already. It’s a starting point, literally in the name.

It’s being applied in a format that has been shown to appeal to young audiences. https://t.co/krdA7B9dE0

I don't mind if Chris Evans stops playing Captain America after Endgame, given that he's now *becoming* Captain America. His new initiative 'A Starting Point' is what a deeply polarised US really needs right now: https://t.co/oK6AK0QoQ8

He’ll probably never see this, but I wanted to thank @ChrisEvans for boldly risking his career to start up this website. This is ‘A Starting Point’ to ending the pettiness of politics and a promising beginning of *actually* getting shit done. You truly are my Captain America. 🇺🇸 https://t.co/tv5nO1lAbE

The project has yet to be officially launched, so it may end up looking a bit different by the time we see the completed effort. Here’s hoping Evans switches his focus to hinge more upon objectivity than neutrality.