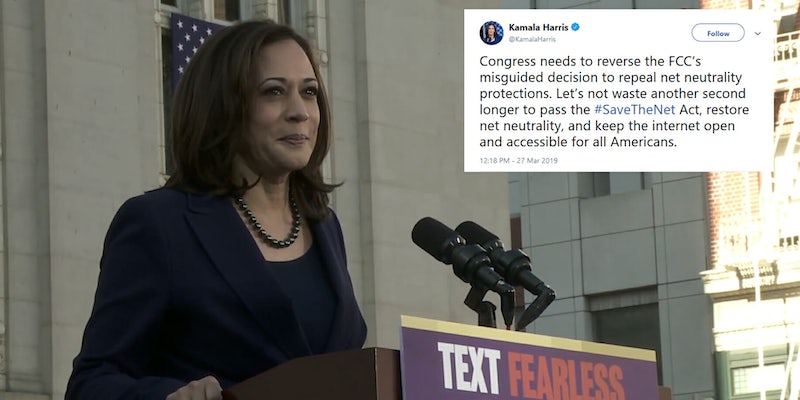 Several other Senate Democrats eyeing the presidency have also called for support.

Sen. Kamala Harris (D-Calif.), a 2020 Democratic presidential hopeful, urged support for the Save the Internet Act, a bill that would restore net neutrality rules, on Wednesday.

Harris, who is one of the bill’s original co-sponsors in the Senate, tweeted on Wednesday that Congress needed to “reverse” the Federal Communications Commission’s (FCC) repeal of net neutrality, which is what the Save the Internet Act would do.

“Congress needs to reverse the FCC’s misguided decision to repeal net neutrality protections. Let’s not waste another second longer to pass the #SaveTheNet Act, restore net neutrality, and keep the internet open and accessible for all Americans,” Harris wrote.

Congress needs to reverse the FCC’s misguided decision to repeal net neutrality protections. Let’s not waste another second longer to pass the #SaveTheNet Act, restore net neutrality, and keep the internet open and accessible for all Americans.

The California senator has joined other Democrats in the Senate eyeing the White House, including Sen. Elizabeth Warren (D-Mass.), Sen. Amy Klobuchar (D-Minn.), and Sen. Kirsten Gillibrand (D-N.Y.), to express support for the bill on Twitter since it was introduced. Harris also did the same at the time.

The Save the Internet Act passed through a subcommittee markup in the House earlier this week, setting up a full vote next month. The bill faces more of an uphill battle in the Senate, where all but one Democrat has co-sponsored the bill.

Harris has long been vocal about her support for net neutrality. Last year, when Congress tried to use the Congressional Review Act (CRA) to overturn the FCC repeal, she said net neutrality was “paramount to the success of our economy and free speech rights—no one website should be prioritized over another.”

She also questioned then Supreme Court nominee Brett Kavanaugh about his views on net neutrality, specifically asking him if he would recuse himself from a hypothetical case because of a 2017 dissent he wrote as a judge on the U.S. Court of Appeals for the D.C. Circuit.