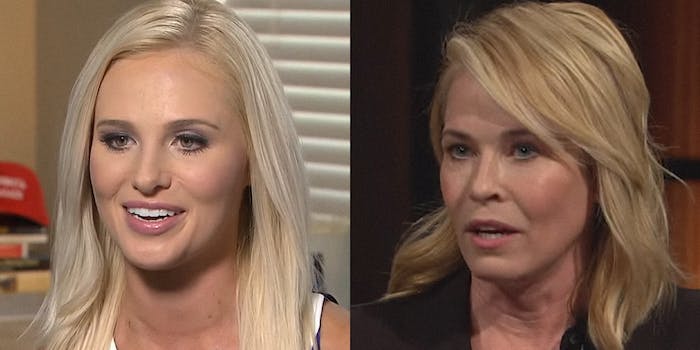 Chelsea Handler and Tomi Lahren to debate at political convention

Does anyone actually want this?

The most heated debate in politics this year may not even include any politicians, but it’s sure to make a lot of people angry.

Handler has become an increasingly outspoken critic of President Donald Trump. She led the Women’s March at the Sundance Film Festival in January. And her Netflix show, Chelsea, has a notably political bent.

Lahren, meanwhile, is an outspoken conservative pundit and popular internet personality who currently works at the pro-Trump advocacy group Great America Alliance as a communications adviser. Lahren was fired from Glenn Beck’s the Blaze in March after she expressed pro-choice opinions during an appearance on The View.

A Politicon spokesperson told the Wrap that Handler will “act as the host and essentially interview the guest (Tomi), and of course, she’ll interject her signature wit and opinions into the conversation.”

News of the debate immediately sparked a collective groan on social media over the prospect of watching Handler and Lahren spout off about politics.

The convention will take place July 29 and 30. The event’s producers have not yet announced the scheduled for the Handler vs. Lahren showdown—but you can be sure it’ll be unmissable online.