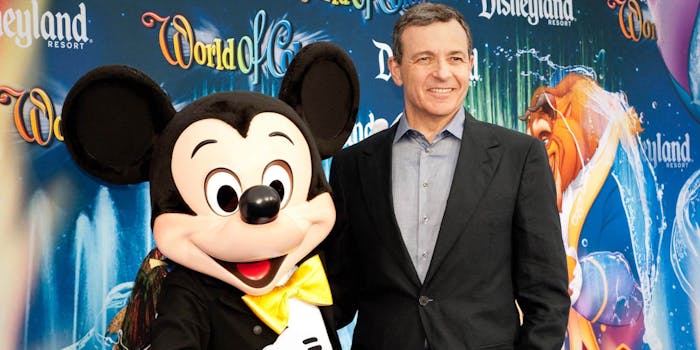 Disney announced on Tuesday that Bob Iger will step down as company CEO.

And while many Twitter users reacted with memes about where Iger is off to next, he is slated to take on the role of executive chairman for the company.

The company revealed that the CEO position would be filled by Bob Chapek, who previously worked as chairman of Disney parks, experiences, and products.

Some think Iger stepping down as CEO is abrupt, prompting conspiracy theories from QAnon believers.

They are pointing to his alleged ties to convicted sex offenders Harvey Weinstein and Jeffrey Epstein.

“Q predicted another big name to fall after Weinstein. Just one day after his sentence, to the day of this post, Bob Iger falls,” one tweeted.

Further trying to exacerbate this theory, another user pointed to a meeting between Prince Harry, Meghan Markle, and Iger. “Harry, nephew of Andrew, who was a pal of Epstein,” they added, in an attempt to connect the dots.

Yet, Iger stepping down is not all that sudden. Iger, who has been Disney’s CEO since 2005, stated during Disney’s investor day in 2019 that 2021 would finally be the year he retired. Chapek will continue to report to Iger as he serves as executive chairman until the end of 2021.

In a statement regarding the announcement, Chapek said he was “honored and humbled” to be given the prestigious role.

“I am incredibly honored and humbled to assume the role of CEO of what I truly believe is the greatest company in the world, and to lead our exceptionally talented and dedicated cast members and employees,” Chapek said.

Iger is widely credited with transforming Disney with major projects such as the launch of the company’s streaming service Disney+. News of the decision even led shares of Disney’s stock to fall roughly 2.5%.

Iger expressed confidence in the new appointment and stated that he looked forward to showing the new CEO the ropes over the coming months.

“With the successful launch of Disney’s direct-to-consumer businesses and the integration of Twenty-First Century Fox well underway, I believe this is the optimal time to transition to a new CEO,” Iger said. “I have the utmost confidence in Bob and look forward to working closely with him over the next 22 months as he assumes this new role and delves deeper into Disney’s multifaceted global businesses and operations, while I continue to focus on the Company’s creative endeavors.”

Chapek is best known for overseeing not only the opening of Disney’s first theme park in mainland China but for the creation of the Star Wars: Galaxy’s Edge exhibits at both Disneyland and Walt Disney World.