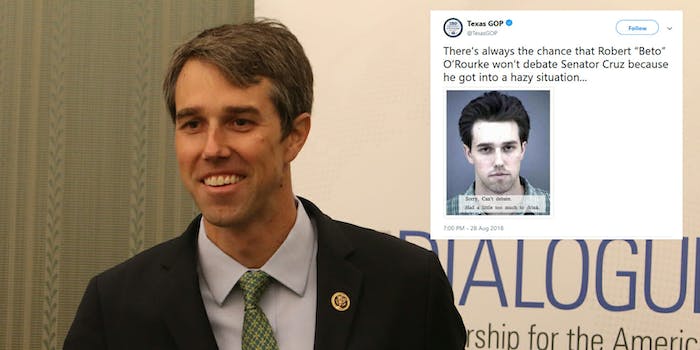 The race to represent Texas in the U.S. Senate is getting closer—and the Texas Republican party is trying to use an old mugshot of Beto O’Rourke, the Democratic challenger, to attack him as he seeks to replace Sen. Ted Cruz (R-Tx.).

On Tuesday, a poll from Emerson College found the race between O’Rourke, a current House of Representatives member in Texas, and Cruz a statistical tie. Cruz garnered an estimated 38 percent of the vote with 37 percent going to O’Rourke.

Shortly after the poll’s release, the Twitter account for the Texas Republican Party tweeted a photo of O’Rouke’s mugshot. The now-Congressman was arrested in May 1995 for jumping a fence at the University of Texas at El Paso and September 1998 for misdemeanor driving while intoxicated, according to PolitiFact. Both arrests were dismissed.

The DWI charge seems to be the butt of the Texas GOP’s joke on Twitter, which is the latest attack to come against the Democratic challenger in recent days.

“There’s always the chance that Robert ‘Beto’ O’Rourke won’t debate Senator Cruz because he got into a hazy situation…” the official Texas GOP account tweeted.

There's always the chance that Robert “Beto” O’Rourke won’t debate Senator Cruz because he got into a hazy situation… pic.twitter.com/4nmd42AEkl

But the internet instead has blasted them for bringing it up—the candidate has been open about his arrests—and also commenting on the looks of O’Rourke.

Listen if your opponent’s mug shot looks like a GQ cover, I wouldn’t spread that around. https://t.co/J2U6rCLD1G

I hereby cast my ballot for Beto's hair. https://t.co/QOqiYmJK5n

Why the Hugh Grant mugshot?https://t.co/8VF9RvSgVA

The part of this I find the most offensive is that @TexasGOP didn't even bother to create a graphic at 1024×512. https://t.co/ZuZh5pbb8w

If you're a Republican in Texas, this is how your party is campaigning. You should be ashamed. Vote Beto. https://t.co/UFkiBt04Mi

And, of course, the “Ted Cruz is the Zodiac killer” joke made it into the replies.

Sure, Beto was arrested for a DUI back in the 1990's, but his opponent committed a string of murders across Northern California in the late 1960's https://t.co/P6mvOW3ltI

A campaign strategy of posting a hot, old mugshot people seem to like is probably not the best way to widen the gap in polls.