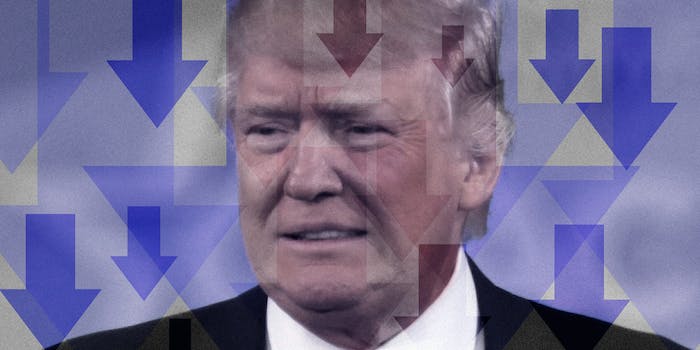 The 7 best Reddit communities for people who oppose Trump

Sick of Donald Trump? These subreddits are for you.

Reddit can be a bit daunting for newcomers. But there is no doubting it’s one of the best places to find news and information—as long as you navigate past all the nonsense.

There is no shortage of political subreddits to get your news on the self-proclaimed “front page of the internet.” And if you’re looking for articles, thoughts, and opinions to satiate your liberal political leanings, there are plenty of options.

Here are seven political subreddits for those who are not fond of President Donald Trump.

The easiest place to find both run-of-the-mill political news and information is r/Politics.

The subreddit is exclusively news regarding U.S. politics and has nearly 3.5 million subscribers. If you’re looking for the latest political news, r/politics has it—with new stories rising every few minutes. (Check out the community’s “rising” section for the latest high-quality posts.)

While it doesn’t have an explicit political leaning, much of the top news always seems to be critical of Trump, but that is more representative of the news cycle and the subreddit’s members than any intended political slant.

Essentially, if you want a rundown of what the biggest political news is, you’d be hard pressed to find a more centralized and continuously updating place than r/Politics.

There is a saying about Trump: “There is always a tweet,” that contradicts what he is saying or doing in office. If you like pointing out the president’s contradictions, r/TrumpCriticizesTrump is the place for you.

The Reddit community, which has more than 100,000 readers, scours through all of Trump’s tweets and claims “for every Trump action there is a Trump tweet criticizing that action.”

As you might imagine, there are a lot of examples.

One recent Trump tweet about Obama visiting hurricane victims as a way to be seen “acting like a president” caught the attention of r/TrumpCriticizesTrump—because he did the exact same thing last week when he visited Texas in the wake of Hurricane Harvey.

The “resistance” has cropped up in the wake of Trump’s presidency with activists organizing rallies, marches, and protests on a weekly basis.

If you are someone who wants to join any number of the causes or protests, r/esist, and its nearly 100,000 subscribers, can help point you in the right direction.

The subreddit aims to “distill useful information” and aims to “have discussion on how to best resist the Trump administration and those who enable it,” according to its bio. Rather than just serving as a place to share the news, r/esist helps people organize.

“This is not intended to be just another Anti-Trump circle-jerk,” the subreddit reads. “While this rule isn’t absolute, please try to focus your energy on productive action.”

r/esist has links to help people considering running for office in the wake of Trump’s presidency, upcoming town halls, legal help regarding immigration, and various organizations that are organizing protests and rallies.

As the name implies, r/EnoughTrumpSpam is hyper-partisan, but if you’re trying to find one place to add some balance to the “insane amount” of Trump news, this subreddit has you covered.

The subreddit, which has 82,779 subscribers—or “alternative fact debunkers,” as they’re called— features a large portrait of Trump in the Barack Obama “Hope” style from the 2008 campaign with the word “Grope” instead.

“This subreddit is dedicated to documenting, parodying, discussing, and countering the insane amount of Trump spam,” r/EnoughTrumpSpam’s bio reads. “If you don’t like anti-Trump spam, this is not the right place for you.”

You can probably guess what the overall sense of the president is for this subreddit. r/Impeach_Trump is a well of Trump-related news for anyone who isn’t happy with the president—and wants him out of the Oval Office.

The subreddit, which has nearly 39,000 subscribers, has some pretty striking art—including a caricature of Russian President Vladimir Putin giving the finger and a tentacle-laden Trump spiraling out of the White House while checking himself in the mirror.

r/Impeach_Trump has most of the recent news about Trump, with some hidden gems among the submissions and a weekly roundtable that discusses some of the finer points about a possible Trump impeachment.

The “alt-right,” a right-wing affiliation known to harbor white supremacists, has been thrust into the mainstream political news cycle after their rally in Charlottesville, Virginia, sparked deadly violence.

If you want to join a community that gleefully denounces the ideology that caused the violence and was pivotal in electing Trump, r/FuckTheAltRight is the place for you.

“Some people may not be totally clear on what exactly the alt-right is, and to be honest, we don’t have a perfect description of them either,” the subreddit’s bio reads, before pointing to a former alt-right subreddit where they “explicitly described their movement as white nationalist.”

The subreddit, which has nearly 35,000 readers, has dozens of links each day about the extremist movement that might not be picked up by mainstream media outlets. So if you really want to dive deep into what it is and what the current news surrounding it is, r/FuckTheAltRight will help.

Let’s end on a lighter note. While many of the subreddits above are serious, helpful for organizing, or just point out some of the more bizarre things that have happened during Trump’s presidency, r/PoliticalHumor is a meme-goldmine.

With more than 200,000 subscribers, the subreddit is constantly flowing with the latest political memes, satire, cartoons, and other funny tidbits from the internet regarding Trump and his presidency.

Sometimes humor is the best way to deal with the seemingly never-ending stream of news that comes out of the Trump presidency.