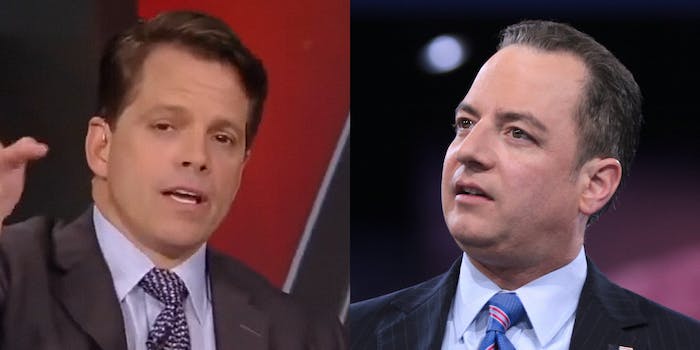 The cyber is very tough.

If you thought Anthony Scaramucci would exit the national stage without one last baffling moment—in a 10-day performance littered with them—well, try reading Othello.

What does that mean? Unclear—but that’s what Scaramucci, the former White House communications director, emailed to a person he thought was former White House Chief of Staff Reince Priebus a day after President Donald Trump unceremoniously let him go.

According to a new CNN report, Scaramucci, as well as other White House staffers, were tricked into responding to an emailer impersonating their coworkers.

So, when Scaramucci fired off at Priebus, he was really just talking to a total stranger. Still, their conversations are … illuminating. It comes from Saturday, a day after Priebus was officially ousted.

“I had promised myself I would leave my hands mud free, but after reading your tweet today which stated how; ‘soon we will learn who in the media who has class, and who hasn’t’, has pushed me to this. That tweet was breathtakingly hypocritical, even for you. At no stage have you acted in a way that’s even remotely classy, yet you believe that’s the standard by which everyone should behave towards you? General Kelly will do a fine job. I’ll even admit he will do a better job than me. But the way in which that transition has come about has been diabolical. And hurtful. I don’t expect a reply.”

According to CNN, which spoke with the prankster and reviewed the emails, Scaramucci responded: “You know what you did. We all do. Even today. But rest assured we were prepared. A Man would apologize.”

Fake Priebus wrote back: “I can’t believe you are questioning my ethics! The so called ‘Mooch’, who can’t even manage his first week in the White House without leaving upset in his wake. I have nothing to apologize for.”

Actual Scaramucci responded: “Read Shakespeare. Particularly Othello. You are right there. My family is fine by the way and will thrive. I know what you did. No more replies from me.”

It is unclear whether, in this tragicomedy, Scaramucci believes himself to be the titular Othello or the nefarious Iago.

CNN also revealed that a Homeland Security adviser Tom Bossert, who heads up cybersecurity matters, was duped into giving out his personal email when the prankster, this time posing as White House adviser and Trump son-in-law Jared Kushner, invited him to a barbeque where he promised food better than what was served when Kushner went to Iraq.

The White House confirmed the incident to CNN. Also duped by the prankster was Eric Trump, who briefly thought he was talking to his brother, Donald Trump Jr., before catching on, and Jon Huntsman, Trump’s pick to be ambassador to Russia, who thought he was speaking to Eric Trump.