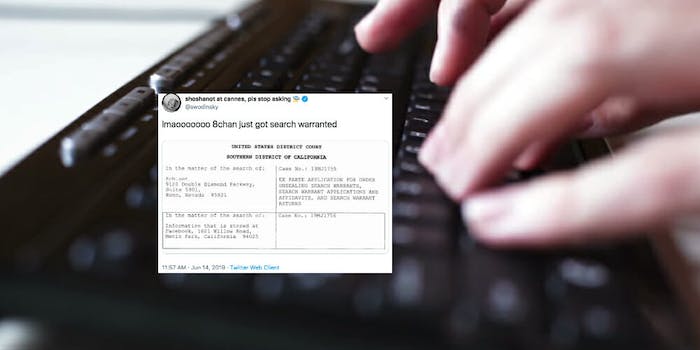 Alt-right message board 8chan was served a search warrant

The warrant is in connection to the Poway synagogue shooting.

A search warrant has been issued to 8chan, an alt-right online message board. The warrant is in connection to the Poway synagogue shooting in California.

On April 27, 19-year-old John Earnest opened fire on the Chabad of Poway synagogue in Poway, California. The terrorist attack resulted in one person’s death and the injury of three others. The attack occurred on the last day of Passover, the Jewish holiday, and was live-streamed by Earnest on 8chan.

8chan is an online message board that launched in 2013 and can only be characterized as an even more lawless hub for heinous discourse than 4chan.

Court documents, that went unsealed on June 13, reveal that on April 29, a search warrant was issued to 8chan for the IP and metadata information on Earnest’s posts from the day of the shooting.

The warrant also calls for the information of other 8chan users who commented on Earnest’s posts. The users who replied to the thread that Earnest posted could be “potential witnesses, co-conspirators and/or individuals who are inspired” by his posts about the shooting, according to the warrant.

The Federal Bureau of Investigation (FBI) agent who submitted the warrant also wrote that Earnest himself was “inspired and/or educated” by other individuals posting on the forum.

“I’ve only been lurking for a year and a half, yet what I’ve learned here is priceless. It’s been an honor,” Earnest wrote in a post on 8chan. Earnest is also being accused of setting fire to a mosque in March and defacing the building with a statement of support for the Christchurch shooter.

The Poway synagogue shooting took place not even two months after the March 15 terrorist attack on the Christchurch mosques. In this attack, a 28-year-old man murdered 51 people at two mosques in Christchurch, New Zealand, before being apprehended by police. The connecting thread between the two acts of terror is the perpetrators’ patronage of the dark corner of the internet that is 8chan.

Particularly, both posted to 8chan’s /pol/ board. The /pol/ board goes by the moniker of  “politically incorrect” and has become a hub for neo-Nazis and those in the alt-right to jokingly discuss their hate.

Prior to the incident, the Christchurch shooter uploaded a manifesto to 8chan. The 74-page manifesto perfectly exemplifies the tone of 8chan and the /pol/ board. The manifesto is replete with memes and inside jokes that cater to the dark humor present on the board.

It distracts people who are not in the know of jargon from 8chan into believing that views being espoused in the writing, while hateful, are just inconsequential ramblings. It’s one prolonged “shitpost,” an absurdist piece of writing seemingly meant to not be taken seriously and derail a conversation.

8chan currently only has one rule when posting: “Do not post, request, or link to any content that is illegal in the United States of America and do not create boards with the sole purpose of posting or spreading such content.” Any form of moderation is near nonexistent.

8chan stands as one of the last bastions of free speech on the internet. That is, free speech in the edgy, right-wing provocateur sense–which puts more weight into anti-censorship than into the wellbeing of those who could potentially get hurt by the actions that hateful rhetoric often leads to.

After the Christchurch shooting, internet service providers in New Zealand blocked websites that hosted the shooter’s video of the incident, including 4chan and 8chan.

Now, as the search warrant issued to 8chan moves forward, it seems even more precedent is being set on regulating the internet’s problem child. With liability for being a co-conspirator on the table for anyone who participates in threads outlining manifestos or detailing plans for possible terrorist attacks, it is clear that the “shitpost” nature of 8chan has to be taken more seriously, as the consequences it leads to are wholly real.