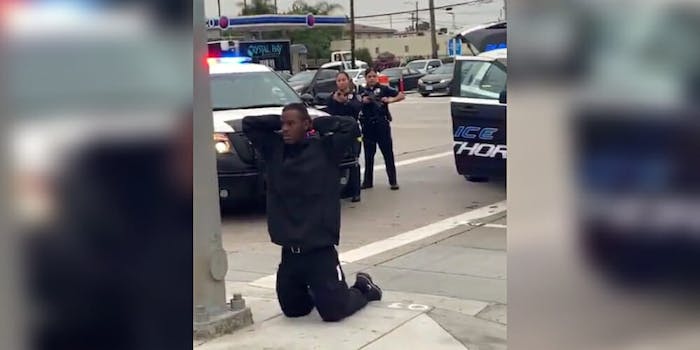 Here's what the woman who recorded, and possibly saved the man's life, had to say.

In a now-viral video, police officers can be seen pointing their weapons at a Black man, who is on his knees as his hands are raised above his head.

The video was originally posted to Instagram by Holsey on June 8. It then made its way to Twitter, where it has amassed over six million views.

Cops with guns drawn surrounded an unarmed Black man, William, who was kneeling on the ground with his hands in the air, in California this AM.

It’s filmed by a young woman, Skye, who I think literally saves his life. Listening to her is gut-wrenching.pic.twitter.com/JKv8khF1Fd

“Cops with guns drawn surrounded a Black man, William, who was kneeling on the ground with his hands in the air, in California this AM. It’s filmed by a young woman, (Sky), who I think literally saves his life,” wrote Rebecca Kavanagh, a New York City public defender. “Listening to her is gut-wrenching.”

Holsey told the Daily Dot that she recorded the incident out of fear for the man’s life.

“They were being excessive,” Holsey said. “I felt like if I didn’t record, of course (the police) would have hurt him. They would have done everything brutal because they feel like they can or they have to.”

The Hawthorne Police Department later posted a press release about the incident on Twitter.

The police department alleged that a police officer was at the intersection, shown in the video, when she noticed employees at a gas station attempting to grab her attention. The employees were pointing to the man, William Ewell, across the street just as a 911 call came in reporting a robbery at the gas station. The caller said weapons were possibly involved.

“I personally feel like once he dropped to his knees and his hands were behind his back, he was no longer a threat,” Holsey said. “Therefore they should’ve treated it as such, even if one or two cops had a gun on him while the other cop proceeded to arrest him. That should’ve been in their hands, not mine. I shouldn’t just see (the officers) on standoff with this young man.”

Not long after the video begins, an additional officer pulls out a gun.

Many Twitter users pointed out that one of the officers suddenly points her weapon at the camera.

“You’re gonna shoot me too, right? For filming,” Holsey asks the officer who raises her weapon.

Confirmed here, the large gun is being pointed at the woman filming this. pic.twitter.com/4j0Fxk4sn3

Twitter users pressed the police department to answer one critical question: “Did the officer point a weapon at an innocent bystander?”

Tweet from Hawthorne police department apparently admitting the officer had the gun trained on the young woman who was filming the arrest, Skye. pic.twitter.com/0Wx7JgKff1

The police confirmed the gun was set on Holsey. An officer ordered her to move, but she was determined to ensure Ewell’s safety at all costs.

“You want me to move out of the way because I’m in your shot?” Holsey recalled thinking during the incident. “And If you shoot me because you were trying to shoot him.. I’m willing to take that.”

Holsey addressed an officer as she tells him the story of her late boyfriend, who was also the father of their three sons, Leroy Browning. Browning was shot and killed by police in 2015.

Browning, 30, crashed his car into a Taco Bell drive-thru while intoxicated at 3am, as reported by the Los Angeles Times. A police officer was attempting to arrest Browning when Browning proceeded to tackle a deputy and grab his firearm. The officer struggled to remove Browning’s grip from the weapon until one of the deputies shot Browning.

Holsey said she felt the scene resembled the night Browning was killed. Terrified for the man’s life, she begins to sob as she begs Ewell not to move.

“I don’t understand why y’all have got guns drawn on him right now. Are y’all about to kill this man?” she cries.

An officer approaches Holsey and asks “who that gentleman is to (her)” after Ewell is detained.

“I don’t even know him … but I care that much,” she replied.

Kavanagh told the Daily Dot, through a Twitter direct message, that she believes Holsey deescalated the situation.

“(Holsey’s) response was not unreasonable,” Kavanagh wrote. “Not just because she had been through a similar experience with her boyfriend, but because statistics show us that this is such a common experience for Black men and women in their interactions with the police.”

Holsey said police officers would get better responses if they treated people with respect. She filmed in the line of fire to ensure a total stranger would be treated fairly and walk away with his life.

“We have to start caring,” Holsey said. “If we want to start to heal, if we want a positive world, we have to care about each other.”