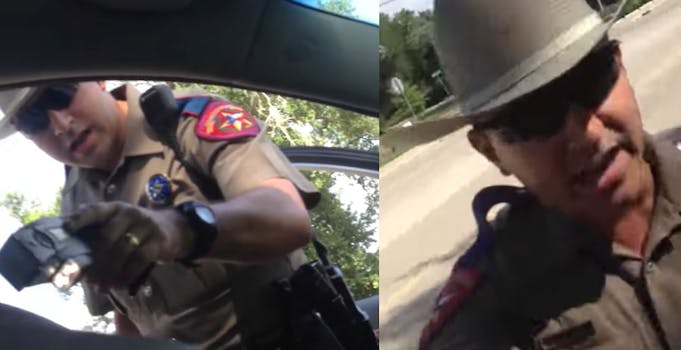 Her family has asked for her case to be reopened.

Sandra Bland recorded the traffic stop that eventually led to her arrest and untimely death on her cellphone. The footage was made available to the public for the first time on Tuesday.

The video shows a white Texas trooper, Brian Encinia, threatening Bland with a stun gun and threatening to drag her out of her car. It also seems to contradict earlier statements that he feared for his life.

“I will light you up!” Encinia can be heard saying in the new footage.

The footage confirms her family’s suspicion that Texas officials may have withheld evidence in the case that could prove that the trooper’s account of the incident was false. Her family is now asking for the investigation to be reopened.

“Get off the phone!” Encinia demands.

“I’m not on the phone. I have the right to record,” Bland replies. “This is my property.”

“Put your phone down right now!” Encinia screams right before the clip ends.

Bland, a 28-year-old Black woman from Illinois, was visiting Texas in July 2015 when she was stopped by the Texas Department of Public Safety trooper after failing to signal a lane change in Waller County.

She was found dead in her cell three days after her arrest. Her death was ruled a suicide, but the ruling that has been questioned by many skeptics. Her family has maintained that she wouldn’t have taken her own life.

Previously released dashcam footage showed Encinia asking Bland to put out her cigarette and eventually threatening to drag her out of her car.

In the newly released video, Encinia can be heard ordering Bland to “Get out of the car now!”

“Why am I being apprehended? You trying to give me a ticket for your failure?” Bland asks in the video.

“I said get out of the car,” Encinia replies. “I’m going to drag you out of here.”

“Why am I  being apprehended?” Bland asks again. “You just opened my car door. So you threatening to drag me out of my own car?”

The new footage was retrieved by the Investigative Network and first published by WFAA8.

The family said they didn’t know about the video’s existence and believe it was intentionally withheld. Up until now, the dashcam footage was considered the only evidence in the case. The family’s lawyer, Cannon Lambert, told the New York Times that the video could have been used by prosecutors to show that Encinia had lied about fearing for his life.

“My safety was in jeopardy at more than one time,” Encinia previously told investigators.

Texas Department of Public Safety officials told WFFA8 that the video was not intentionally withheld.

The release of the video sparked renewed conversations regarding Bland’s death and calls for her case to be reopened. Many tweeted their frustrations with harm that has come Black people due to white people’s lies.

There’s a long history of black ppl being killed based on someone else’s lie.

again and again police narratives of these shootings turn out to be complete lies https://t.co/MSPq1zwC9R

The Sandra Bland cell video was released 4 years after her death. It’s disturbing and sickening how many of our people are being jailed and killed over lies.

This officer who arrested Sandra Bland should go to jail for lying and withholding evidence. They arrested for a lie. He said she was assaulting a public servant. https://t.co/vNjCgtdWUS

This is blood boiling. They hid this video!!!The trooper claimed he was in fear of his life, how can one lie this much? Also, local journalists are heroes. They go out there, work to help communities fight injustices & often completely go unnoticed https://t.co/bLs6ToWyxC https://t.co/oVwye5QDFN

In December 2015, a grand jury decided not to indict anyone for the death of Bland. Encinia was indicted on misdemeanor perjury charges for lying about the circumstances of her arrest. The charges were later dropped with the agreement that Encinia would never return to work in law enforcement.

In 2016, Bland’s family settled a $1.9 million wrongful death lawsuit with the DPS and Waller County jail, where Bland was held and later died.

The Daily Dot has reached out to Black Lives Matter.