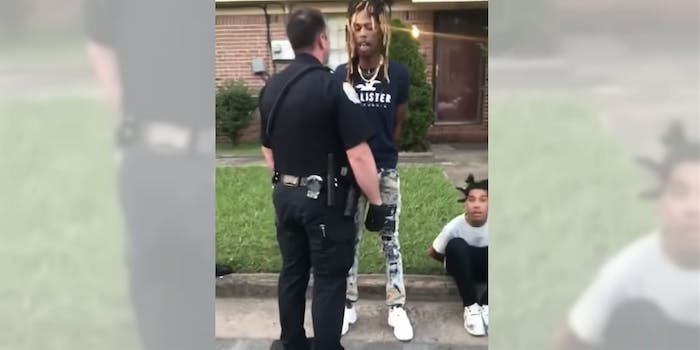 The man said he was unlawfully detained.

Two Black men were handcuffed and one was searched without consent last weekend in Decatur, Alabama. When one of them asked for an officer’s identification, the police officer answered, “fuck you.” An onlooker caught the exchange on camera.

Dizzy Dez, CEO of Wave Rydaz Entertainment, told the Free Thought Project that he and his colleague, Sa’Von Hobbs, were filming with a video camera when a police officer approached them and asked that they put their hands in the air. The officer proceeded to handcuff them.

Dez said police told him they were called to the scene because someone saw what appeared to be a man holding another man at gunpoint. Neither Dez nor Hobbs had a gun, although they were filming with a video camera, Dez said.

“I asked her, ‘was I being detained?’ She says ‘no’ but proceeds to put me in handcuffs as I ask then why am I being cuffed,” Dez told the Free Thought Project.

Dez then refused to answer any questions, utilizing his Fifth Amendment right, and the officer responded by searching him without his consent. At this point, two other officers arrive, and this is where the video starts. Dez asks the officer who searched him for her name and badge number. Then, he asks for her supervisor.

“What do you need a supervisor for?” one of the officers is heard asking.

“Because I was just unlawfully searched,” Dez said in response. “I don’t understand why I was just searched, why my information was pulled out of my pocket for no reason.”

“Because she can do that,” the officer responds.

“But she doesn’t have the right to do that,” Dez said. “I’m detained under no reasoning. I haven’t committed a crime… She went in my pocket though, and she’s not supposed to go in my pocket. That’s a search.”

“You don’t really know half the shit you’re talking about,” the officer said.

“I know enough of the shit that I’m talking about,” Dez said.

“No, you don’t,” the officer said as he walked away. “You’re a fucking idiot.”

Then, Dez asked for that officer’s name and badge number, to which the officer turned around and walked back to Dez, stood inches away from him, and said, “529 is my badge number.”

After a brief exchange, the officer walked away again, and Dez called after him, asking for his name.

“Fuck you,” the officer responded.

After the video ends, Dez and Hobbs were released.

“The other officer talked to me after they left as he felt the situation shouldn’t have escalated that far and stated that he didn’t know what his problem was,” Dez told the Free Thought Project.

Dez said he is seeking an attorney and will file a complaint. The Decatur Police Department did not respond to a request for comment in time for publication.