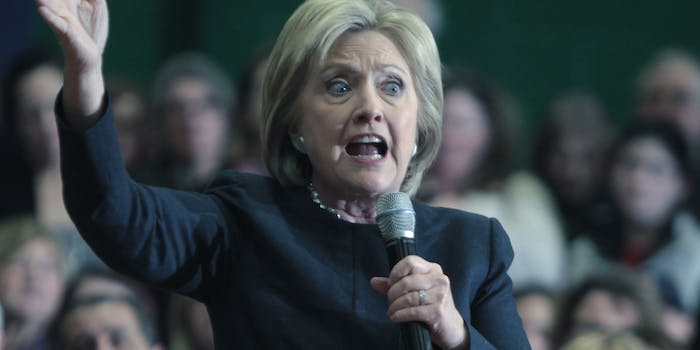 The leading causes of the Very Average Scream, compiled

Oh, Donald Trump. You don't know the half of it.

After Hillary Clinton’s historic Thursday night acceptance speech at the 2016 Democratic National Convention, a couple of people seemed kind of miffed about the presidential candidate’s lack of smiles and generally serious presidential tone.

Among hundreds of men who tweeted at the future U.S. president to “smile more” during her speech, rival Republican candidate Donald Trump used his closest policy advisor (Twitter) to deliver a condemnation of Clinton’s “Very Average Scream.”

Crooked Hillary Clinton made up facts about me, and "forgot" to mention the many problems of our country, in her very average scream!

Twitter promptly broke out in virtual guffaws, wondering what exactly constituted a “very average scream” and what exactly Trump was even talking about, as usual. But many also rushed to adopt the inventive phrasing, suggesting that T-shirts be printed, bands be formed, and improv comedy troupes use the line as a jump-off point for jokes.

If four teen girls don’t start a punk band called “Her Very Average Scream” then we have failed as a country. https://t.co/njEj2U8TBq

This genuinely made me laugh out loud. "Very average scream" used in an improv scene would really get me. https://t.co/nXuT8UZV6t

After quickly rushing to buy the domain for VeryAverageScream.com for 99 cents via GoDaddy (no, really, I own it now), we decided to explore some of the factors that might lead to Hillary Clinton’s Very Average Scream—and the average screams of women all over the country.

Here is a list of the nation’s leading causes of Very Average Screaming:

1) Being told to “smile” by men on the internet.

2) Making 79 cents for every dollar a man makes.

5) Having your face photoshopped onto countless bizarre, creepy images like this:

6) Getting bombarded by unsolicited dick pics and harassing messages when you’re just trying to find a date.

7) Having to save up money for childbirth because your country doesn’t have a national family leave policy of any kind.

8) Thousands of backlogged rape kits at police departments across the country because apparently no one cares.

11) Fragile masculinity that inspires the manufacturing of “tactical soap” and separate boxes of facial tissues that are just for men.

13) Transgender women being murdered at higher rates than everyone else.

15) Being told your lesbianism or bisexuality is a “phase” that will end when you “find the right guy.”

16) Being compared to an actual monkey by racists on the internet.

19) Menstrual shaming. And politicians who pass restrictive reproductive health laws and don’t seem to want to hear all the details about your clots and uterine chunks as they fall out of your body each month.

20) Not being safe from rape at home, at work, on the street, in an Uber, or anywhere else, and always having to watch your back just in case.

24) The fact that even though women make up the majority of the population, only 20 percent of U.S. senators and 19 percent of representatives in Congress are women.

25) Just even seeing the word “smile” written on a piece of paper at this point.

26) Because it’s so hard to get an abortion in some states, it’s simpler to spend hundreds of dollars on top of procedural costs to fly to another state to find a clinic that’s close enough.

27) Because in some places, the only way to get an abortion is on a boat. In the ocean.

28) Weird Asiaphile dudes who think Asian women are “submissive” and that’s why they want to date them.

29) Because sex trafficking happens, and so does stigma and discrimination against sex workers who aren’t trafficked but just trying to make enough money to live.