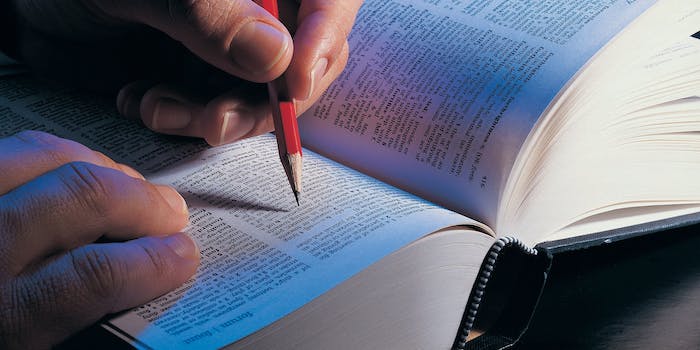 Praise be: ‘Misgender,’ ‘woke,’ and ‘manspread’ are now in the dictionary

The latest Dictionary.com additions are an 'intersectional' dream.

Are you feeling “butthurt” because you don’t know what “woke” means?

Well, now you can find out by looking in the dictionary.

Those are just two of the gloriously millennial terms added to Dictionary.com on Tuesday. The website added over 300 new words and updated 1,700 entries—and it’s the third consecutive update that’s “expanded headwords and definitions related to gender and sexual identity.” Some of those useful LGBT terms are: misgender, hijra, intersectionality, ze, and panromantic.

Others are just fun. If you’ve ever wondered what exactly “health goth” is, let is henceforth be defined as “a fitness enthusiast who is part of the goth subculture.” Or a somewhat-nihilistic spin class addict, or whatever.

There are fantastic new words with which to make fun of men, too. Next time some douche on the bus takes up 20 seats because he thinks his junk is that big, point to the Dictionary.com app on your phone and zoom in on the word “manspread” to shame him into closing those legs. The newly legitimized “butthurt,” or the “mental distress or irritation caused by an overreaction to a perceived personal slight,” is perfect for summarizing guys who spend literal hours whining about how an all-female Ghostbusters sequel is ruining the childhoods they already had.

Prefer to sex it up with manly menfolk rather than pour forth a constant stream of misandry? Meet “lumbersexual” (that’s a guy “whose style of dress and appearance is reminiscent of the ruggedly masculine stereotype of the lumberjack”). Picture meeting up with your “lumbersexual” Tinder date while clad in “athleisure,” another word on the list that means “what Daily Dot staffers wear to work on the days they actually leave the house to go to the office.”

The full list of new Dictionary.com definitions includes a ton of terms that come in handy when discussing dating, identity, and working in the “lamestream” media as a “presstitute” who writes “hot takes” that are “longform.”

Here is a selection of some of the new words added for July. Don’t you dare make us explain why Pokémon is on the list.

al desko: eating at one’s desk in an office.

athleisure: a style of clothing inspired by athletic apparel but also worn as casual, everyday wear.

butthurt: mental distress or irritation caused by an overreaction to a perceived personal slight.

Daesh: a name used to refer to ISIS/ISIL, the radical Sunni Muslim organization.

free-range parenting: a style of child rearing in which parents allow their children to move about without constant adult supervision, aimed at instilling independence and self-reliance.

ghosting: the practice of suddenly ending all contact with a person without explanation, especially in a romantic relationship.

health goth: a fitness enthusiast who is part of the goth subculture.

hijra: a person whose gender identity is neither male nor female, typically a person who was born male and dresses as a woman.

intersectionality: the theory that the overlap of various social identities, as race, gender, sexuality, and class, contributes to the specific type of systemic oppression and discrimination experienced by an individual.

lamestream: noting or relating to traditional print and broadcast media, when regarded as lacking the fairness, creativity, etc., of independent online news sources.

lumbersexual: a man whose style of dress and appearance is reminiscent of the ruggedly masculine stereotype of the lumberjack.

manspread: to sit with one’s legs far apart, taking up too much space on a seat shared with other people.

misgender: to refer to or address (a person, especially one who is transgender) with a pronoun, noun, or adjective that inaccurately represents the person’s gender or gender identity.

NBD: acronym for no big deal.

panromantic: noting or relating to a person who is romantically attracted to people of all sexual orientations and gender identities.

presstitute: a journalist or media source whose news coverage is considered to be inappropriately influenced by business interests, political motives, etc.

train wreck: a person who has experienced a personal failure, disaster, etc.

warmist: a person who accepts global warming as a reality (a term used by people who reject the concept).

woke: actively aware of systemic injustices and prejudices, especially those related to civil and human rights.

ze: occasionally used with a singular indefinite pronoun or singular noun antecedent in place of the definite masculine he or the definite feminine she.

Zika virus: a chiefly mosquito-borne virus of the genus Flavivirus that causes Zika, a mild illness.