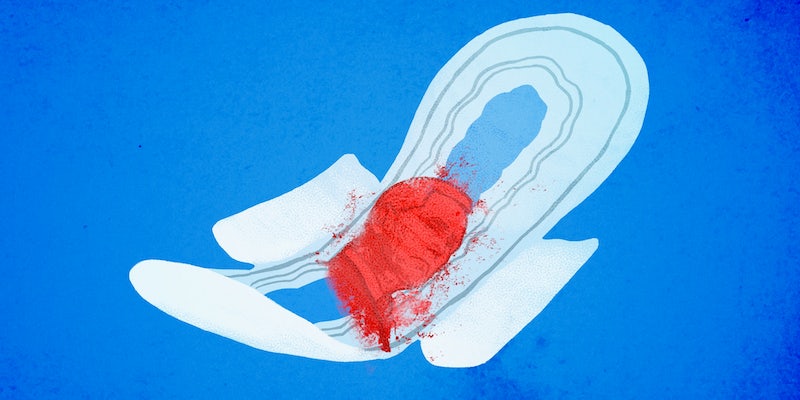 Since Gov. Mike Pence has an interest in women's reproductive health, women are giving him status updates on their uteruses.

Feeling some fomo about missing today’s launch of the 2016 Republican National Convention in Cleveland, Ohio?

Well, there is a way to participate and fulfill your civic duty without leaving the comfort of home—that is, if your civic duty is to troll Donald Trump’s vice presidential pick and governor of Indiana, Mike Pence. It’s called #PeriodsforPence, and all you have to do is post the gory details of your period online, or call them in to the GOP candidate’s hotline.

No uterus? No problem! You can also call in your #TesticleTestimonies to let Pence know everything about your balls, semen, prostate, or whatever else you think he might be interested in.

The Indiana governor has long been a contentious and controversial politician, especially in regards to women’s rights. Under his tenure, Indiana became the first U.S. state to convict a woman (Purvi Patel) for “feticide” after a miscarriage, sentencing her to 20 years in prison. He has also been fighting to defund Planned Parenthood since 2007, when he first introduced legislation that would prevent Title X funds from going to any group that provides abortions. The legislation was a popular model adopted by conservative states, finally inspiring the Defund Planned Parenthood Act that the House passed in 2015.

“I long for the day that Roe v. Wade is sent to the ash heap of history,” Pence said after the passage of his first 2011 bill that stripped Planned Parenthood of funding.

The vice-presidential candidate has made himself such a looming figure in fighting against women’s reproductive rights, the Periods for Pence campaign has been around since March, when women began telling Pence every little detail of their reproductive health.

“Wanna legislate my body?” asks a description on the Periods for Pence Facebook page. “You’re gonna know how it works!”

The campaign also has a @PeriodsforPence Twitter handle, which collects and retweets some of the most intimate details about everything from the contents of menstrual cups to the sex lives of couples.

@GovPenceIN – I menstruated into my menstrual cup this weekend and intentionally flushed everything, will I go to jail? #periodsforpence

@GovPenceIN No pregnancy to report. Thought you should know since I was Indiana visiting family. Normal flow. A few cramps. #PeriodsForPence

@GovPenceIN Reeeeeeeal heavy flow day. Yowza. I know how much you care about my reproductive system. #PeriodsForPence

. @GovPenceIN When I take out my IUD does that require exorcism (bc EVIL) or funeral (bc your logic lol)? Please advise #periodsforpence

But if you don’t feel like publicly posting about your itchy diaper-like overnight pads, thick fertile fluids, or the amount of eggs your doctor says you have remaining, that’s understandable. After all, reproductive health is kind of personal. That’s why the Periods for Pence campaign has made the governor’s phone number widely available online: Shy Pence fans can call in a status report at 646-736-1779.

And if Mike Pence isn’t your type, there’s an alternative. One woman has been tweeting all the gory details of her period to Donald Trump since April. If he’s going to run a country that’s half comprised of people with uteruses, he might as well know what he’s getting into.