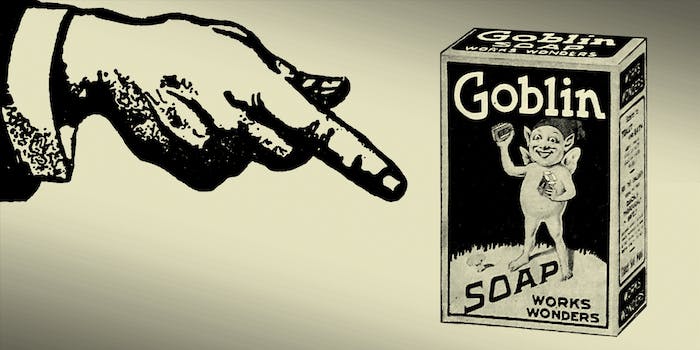 What makes a “real man”? For many, it’s having a career that regularly puts you in danger, such as a coal miner, a lumberjack, or a professional scorpion tamer (probably). Or, well, any career in the military. Because there seems to be no lack of fetishizing military culture by men who both are and aren’t enlisted.

One such obvious example is the offerings from Duke Cannon, a company selling basic toiletries and gifts for men. Which is great, because they look like they smell nice and work well. However, Duke Cannon’s sales pitch comes with an extra dose of man-policing.

“Duke Cannon comes from a different era—an era when men had a greater purpose than building spreadsheets and spending their Saturdays at Banana Republic,” says the About page, except in ALL CAPS. Duke Cannon takes shots as “metrosexuals,” vegans, men who enjoy spending time in Pottery Barn, and anyone who doesn’t devote their time to “meaningful endeavors.”

So how does a man find his greater purpose? With “tactical lip balm.” The product is probably what Duke Cannon is best known for, a lip balm with SPF protection that was tested by “active military personnel.” It’s also “blood orange mint” flavor, which sounds a little European to us?

Duke Cannon’s other products include “Bloody Knuckles” hand balm, “Tactical” soap on a rope, and the “Big Ass Brick of Soap” in scents like “Naval Supremacy,” “Accomplishment” and “Productivity.” Oh, and there’s a gift set that comes with a literal hatchet. They do give a portion of their proceeds to causes that support veterans and, according to reviews, their products seem to work really well.

What Duke Cannon is selling is not just “straightforward” soap and balms for men, but a rejection of aesthetics. A real man, the copy suggests, doesn’t care about anything fancy—fashion, technology, even education (they accuse other soaps of being made by “overpaid MBAs”). Instead of an obsession with form, they promise 100 percent function. The soap is a brick because that’s how it works best. The hand balm heals your hands, nothing more, nothing less. The soap on a rope is just to “maximize hygiene.”

Except within that function there is quite a lot of form. Duke Cannon doesn’t reject aesthetics, it just embraces different ones. The choices about font, packaging, color, scent, and design—those are all about fashion. There is no need to store your toiletries in an ammo can or reward returning customers with a military baton other than to show, yes, you like the look of military gear. The only difference between a Duke Cannon man and a Pottery Barn man is his sense of style.

Of course, that’s exactly what Duke Cannon, and many men, put value in. That preferring “tactical” gear over lavender-scented hand soap means something. When it fact, all it means is you have personal preferences. Those preferences, when based on gender, are influenced by everything from hormones to upbringing to societal surroundings and pressures. But they are value-neutral.

“It’s time for man to devolve, not evolve,” writes Duke Cannon. But maybe they can evolve to understand that they’re just as fashion-conscious as anything at Banana Republic.