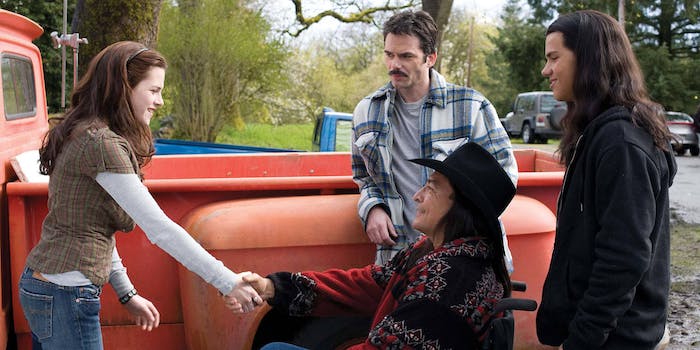 Fans reminded of ‘Twilight’s’ indigenous misrepresentation after it reenters spotlight

Stephenie Meyer recently announced she will be releasing a new Twilight book, titled Midnight Sun, which will be told from the perspective of Edward Cullen. As fans—new and former—express their excitement about the franchise being revived, some are reminding them about the misrepresentation of indigenous people in the novel series and subsequent films.

One Twitter wrote, “Anyway since Twilight is trending, please read the Truth Vs Twilight website written in collaboration with the Quileute Tribe, who had their histories and stories misrepresented by Meyer and  had their artifacts, regalia and CEMETERY commercialized.”

Jacob Black was part of the Quileute tribe in the pop culture phenomenon. The Quileute tribe is a real tribe, and they felt their culture “was represented for background fodder in the teenage love story” and “has seen little benefit,” according to the Burke Museum.

Writer Alex Geoffroy tweeted, “remember how Stephenie Meyer used the name of a real indigenous nation (the Quileute tribe) to be the ‘shape-shifting animal people’ and then proceeded to make money off of ‘Quileute-themed merch’ without their consent.”

The tribe has even partnered with the Burke Museum to bring awareness to the notion Meyer profited off of their culture. They also hope to set the record straight regarding Twilight’s “stereotypical representations of race, class, and gender.”

People online are now urging those who pre-order Midnight Sun to also consider donating to the Quileute tribe to help them move out of a “tsunami zone” and preserve their culture and artifacts.