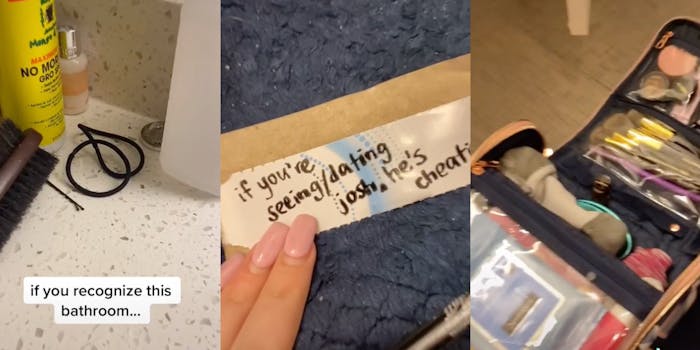 TikToker suspects date has girlfriend, leaves note for her

'If this is your man, he’s cheating.'

When Molly Sharpe picked a guy up from a bar, she was under the impression that he was single. But after seeing him a few times and doing some casual snooping around in his bathroom, what she found made her question whether that’s actually true.

In a video posted to TikTok, she pans around the bathroom and eventually lands on some hair ties and other “female products” that triggered her suspicion—a case full of makeup brushes, Neutrogena wipes, among other items.

“His roommate is single, and I thought he was, too. But if this is your man, he’s cheating,” Sharpe says.

But she wanted to make sure that if her bar pickup does have a girlfriend, and doesn’t simply happen upon the TikTok and recognize the bathroom for herself, she would still know that she’s being cheated on.

So Sharpe left a note inside the case, too: “If you’re seeing/dating Josh, he’s cheating.”

The gesture was largely applauded on TikTok, with other women telling Sharpe she did the right thing.

“You’re a true girl’s girl, bless you!” wrote one user, while another called her decision to leave the note “genius.”

A few people suggested alternate options besides Josh having a secret girlfriend he’s cheating on—an ex that left a whole bunch of makeup there on accident, the possibility that he does drag and doesn’t feel comfortable sharing that right up front, or even that he’s just really thoughtful of other women in his life.

“My brother always left a cosmetic bag of things for me at his house (pads, makeup, hair stuff) for when I spent the night without planning it,” @lilbabyemilyee chimed in.

Sharpe hasn’t posted any followup videos cracking open the mystery, but she did later comment that she wound up confronting Josh and “he got upset/defensive, says he’s single but won’t explain products.”

She also confirmed that because she’s suspicious of his caginess, she hasn’t seen him again since leaving the note.