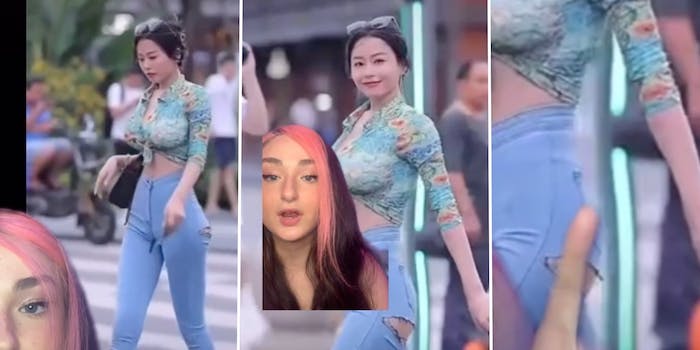 'Seeing is unfortunately not always believing'

A TikToker who has gained popularity by promoting body positivity recently posted a video exposing certain video editing, which has sparked debate about “unrealistic” standards perpetuated by fashion influencers.

The TikToker, @residualdata, says the original video blew up in China and made its way to virality in the U.S. as well. She says that a lot of people think it’s impossible to edit body shapes in videos but then points out places where it is clear the video has been distorted.

In the video, a tall, thin woman with large breasts and a tiny waist walks across the street in slow motion. The TikToker slows down the video even more, and points to a bright green pole that the woman passes as she walks. The pole, she points out, curves toward the woman’s body, proving that edits have been made to alter the way she looks.

“You really have to look at the background,” she says. “This software has gotten so sophisticated that it’s really, really hard to tell.”

Certain things, though, do give away the edits and they mainly lie in the background, she says.

“These kinds of edits are super common in these Chinese street-style videos, which is a separate conversation,” she continues. “I’m really using this to show you how sophisticated this technology is and how hard it can be to decipher these edits.

“Seeing is unfortunately not always believing and you never know who might be using this.”

Many people pointed out other ways in which the video didn’t look quite right and how users can catch on to the edits.

“They also usually stretch the videos so that the people look taller and skinnier. Some only stretch their legs so it’s harder to tell,” wrote @beeyaaach.

“Anyone else notice the impossible physics going on with her as well? Looks like video game physics,” said @kamid69.

“Yes! And the background is artificially blurred, not just the camera focus to more easily hide the warping/adjustments,” commented @pretty_lii.

Others took issue with how the editing helps to perpetuate the sometimes impossible beauty standards for women.

“Her body proportions are soo unrealistic. If this was real she would be in so much pain, especially her back,” said @strawberrymangoshake.

“In order to fit the beauty standard you must get rid of your organs and ribcage apparently. 🙄,” commented @deathbyroses04.

Some expressed frustration in not being able to tell when videos are edited or not.

“Duuuuuude, i saw it and thought it was real. It didn’t feel right to me, but i just accepted it and moved on. Tik tok is ruining my perceptions,” said @angryjackal.

“I literally never would have noticed that :(,” agreed @maryalicebrandon.

However, others took jabs at those who said they couldn’t see the edits.

“I feel like the people who believe its real are really gullible… noone looks like that,” said @stephanie0260.

“The fact that some people can’t tell 😳😳,” commented @brittany_chantal.

Some people even took issue with calling out the edits at all, saying it was a form of shaming as well.

“But why would people care if it’s edited or not? Like just move on with your own business,” said @mor_beee26.