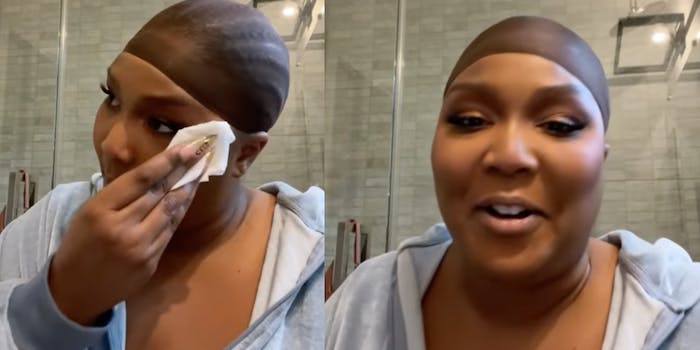 'A lot of people don’t like me because of the way I look.'

Lizzo cried on Instagram Live on Sunday after reportedly receiving fatphobic and racist comments from trolls following the release of her “Rumor’s” music video. It was a vulnerable moment for the singer, and she reiterated that she will not be broken down by the haters.

Her live came a few days after the release of “Rumors,” which was made in a collaboration with rapper Cardi B and her first song since 2019. Ever since she came into the public light, Lizzo has used her platform to emphasize the need for self-love and body positivity.

In her live, Lizzo says that there are days when she is feeling vulnerable, and the negative comments really bother her. “On the days I feel like I should be the happiest, it’s just I feel so down,” she says in the live, which has since been reposted online.

She goes on to share how hard she works, often for 12 hours a day. She points to all the promotional work she does and how she went to the studio after a root canal on two occasions—while shooting a documentary. She says that it’s especially disheartening to receive such messages after so much hard work.

“I’m putting so much loving energy into the world,” she says, breaking down on video, “And, sometimes, I feel like the world just don’t love me back.”

Lizzo, who has been on the receiving end of body-shaming comments from trolls in the past, goes on to say that no matter what she does, there are always going to be people who are going to be mean to her.

She then shares a message for the trolls:

“The people who always has something negative to say about me, that has nothing to do with music or the content of my character or me as an artist but has everything to do with my body or whatever trop you think I fall into—suck my pussy from behind,” she says. “‘Cause y’all motherfuckers will be the main ones catching up.”

While welcoming everyone to enjoy her music, she reiterates that her work is intended for “big Black women” who are constantly under scrutiny from society.

The video wasn’t available on her Instagram on Monday, but Lizzo has been receiving lots of love following it, including from Cardi B. “When you stand up for yourself they claim your problematic & sensitive.When you don’t they tear you apart until you crying like this. Whether you skinny,big,plastic, they going to always try to put their insecurities on you.Remember these are nerds looking at the popular table,” Cardi B said.

“Loving yourself in a world that don’t love u back takes an incredible amount of self awareness & a bullshit detector that can see through ass backwards societal standards… if u managed to love yourself today I’m proud of u. If u haven’t, I’m still proud of u. This shits hard,” she said.

And by Monday morning, Lizzo embraced the “new day” and said: “A new chance to win! We already winning !”