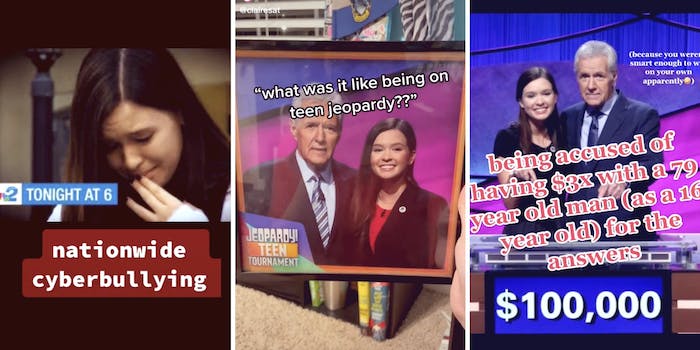 ‘I thought my trolls were bad’: Teen ‘Jeopardy!’ contestant says she was cyberbullied, stalked in viral TikTok

‘You know it’s bad when the dabbing is the least traumatic thing she said.’

Former Jeopardy! Teen Tournament contestant Claire Sattler (@clairesat) shared a glimpse of the “traumatic” aftermath of her 2018 win in a viral TikTok.

In the video, Sattler uses audio from “Pompeii” by Bastille edited to repeat the line “emotional damage.” She shares screenshots of an alleged stalker following her on Google+, a now-defunct social media platform, and photos from when she was a contestant with text explaining how she was cyberbullied.

Sattler wrote that she was “accused of having sex with a 79-year-old man, as a 16-year-old, for the answers,” referring to false allegations by cyberbullies that there was inappropriate conduct between her and the late Jeopardy! host Alex Trebek.

The video was posted on Jan. 6 and by Wednesday garnered over 188,000 views, with several former game show contestants commiserating in the comments.

“I was on Kids’ Jeopardy! and they really tried to sexualize me and diagnose me at age 11,” 2011 contestant Aria Gerson (@not_like_stark) wrote. “Really not ok. I’m sorry all this happened.”

“I was on the Wheel at 19 years old,” another user wrote. “I thought my trolls were bad. Sorry you went through that.”

Other Jeopardy! fans showed their support for Sattler in the comments of the video.

“My friend was on the show as a kid. His experience was different, likely because he is male,” user @cosmicdoll said. “People really go after teen girls for petty shit.”

Another user wrote, “I watched your original appearances and you were such a great player. Sucks that people treat you this way.”

Many users’ attention was grabbed by the final screenshot of Sattler dabbing, a popular dance move that has now been deemed cringeworthy by Gen Z, with the rest of the contestants on the show.

“You know it’s bad when the dabbing is the least traumatizing thing she said,” one user said.

“The dabbing is the most traumatic,” user @liamaxel_ responded in a comment that Sattler liked.

The Daily Dot reached out to Sattler via email and TikTok comment and to Jeopardy! via email.