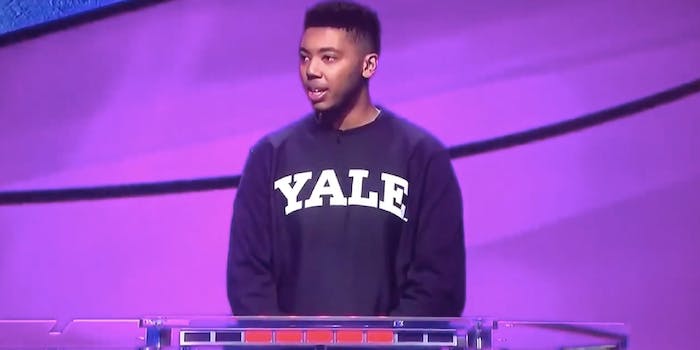 'Jeopardy knows too much. They were ready for this pandemic two months before the U.S. even was.'

People are freaking out about a Jeopardy! contestant “predicting the future” after he gave the answer “pandemic” on the gameshow about a month before the novel coronavirus became one.

A video from Tuesday night’s episode is circulating on Twitter. In it, the host asks Yale student Nathaniel Miller what “describes a disease that affects many people at one time.” Miller answered “pandemic,” like many of us would now that we’re experiencing one, but Miller was asked in early February––before the World Health Organization (WHO) labeled the coronavirus a pandemic.

“Did anyone else get a lump in their throat when they realized ‘pandemic’ was an answer on Jeopardy tonight or just me?” Twitter user @JustinRocke asked.

At least one Twitter user seemed not too pleased about the answer, considering the global situation.

Some were quick to make a meme about the incident.

“That pandemic question did not age well,” one Twitter user wrote.

While some seemed to think that it was an unfortunate or unsettling coincidence, others began touting conspiracy theories.

“Jeopardy knows too much. They were ready for this pandemic two months before the U.S. even was,” Twitter user @KpChillinOut wrote.

It’s worth pointing out that although the WHO didn’t label the coronavirus a pandemic until March 11, there were signs that the virus would trend in that direction. As early as late December, the Chinese government announced it was treating several cases, and by late January, President Donald Trump had already banned travel from China.

So although it may have been chilling to see the “pandemic” answer on TV Tuesday night, it’s safe to say that it was a coincidence and that Jeopardy! is not out to get us.