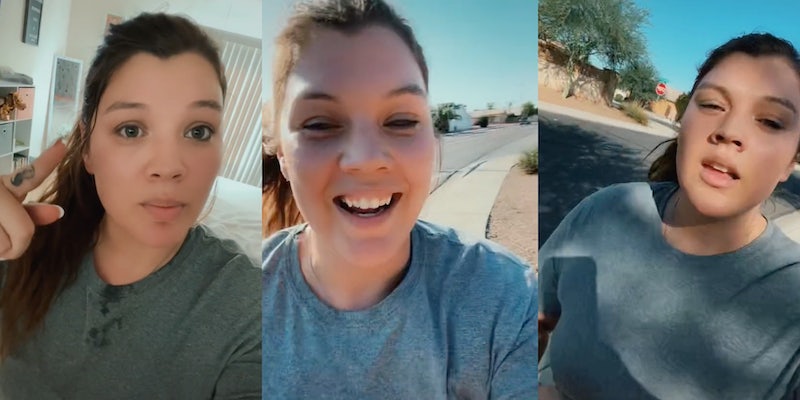 ‘This is traumatizing’: TikToker punishes 5-year-old son by making him run in 104 degree heat

A TikTok mom is raising eyebrows after sharing her unconventional method of punishing her young son, which some viewers are calling “traumatizing.”

“My 5-year-old doesn’t want to listen in school,” Katarina Rodriguez said in a nearly one minute video shared to the social media platform last week. “Where he makes destructive noises, doesn’t listen, thinks that he doesn’t need to settle down when he comes from the playground.”

Sure enough, as Rodriguez explained the situation, she and her son were already out running, with her regularly turning the camera on him while shaming him to viewers.

“This is the first time that we’re gonna run for his sad faces that he gets at school, and he thought we were just going to run to the mailbox, so he took off running. Sprinting. Now he’s dying,” she said, before finally asking him if he would behave in school now.

Despite her assurances that this was an alternative to hitting and spanking, and intended as “discipline,” a number of viewers expressed concern that being so harsh on a young child still learning to control his emotions and outbursts in school could have a negative impact.

“God this is traumatizing,” wrote @eryngium8. “Punishment for not being able to listen in a classroom… There’s obviously something else going on with them.”

“That’s one way to ruin a healthy relationship with exercise,” @rubyrestrained69 said.

Another user claiming to be a pediatrician and child safety expert suggested that this tactic would “fix NOTHING but it can absolutely have detrimental effects.”

A follow up video from Rodriguez features her explaining her reasoning for making the parenting choices she has, and broadcasting them to the internet.

“Not that it’s anyone’s business, we’ve tried other disciplinary actions of grounding, taking away things, corners, whatever, and if those things work for your kids, great. Didn’t work for mine,” she said.

The TikTok mom acknowledged that going from a pandemic to having to sit still in a desk as a 5-year-old was always going to be difficult, but insisted that it was on him to make the choice to be more respectful towards his teacher and peers by participating appropriately in class. Moreover, she claimed that it’s “working”—her son had come home without negative behavior marks in the following days after his viral punishment.

“If I can scare him with the fact that we’re going to run if you do not have a good day and be respectful and nice and kind, so be it,” she said. “It beats my hand stinging from whooping his ass.”

Wrapping things up, Rodriguez reiterated to viewers that the parenting techniques she recorded online are not “anyone’s goddamn business,” and insisted that she’s “raising a man.”

The Daily Dot has reached out to Rodriguez via TikTok message.