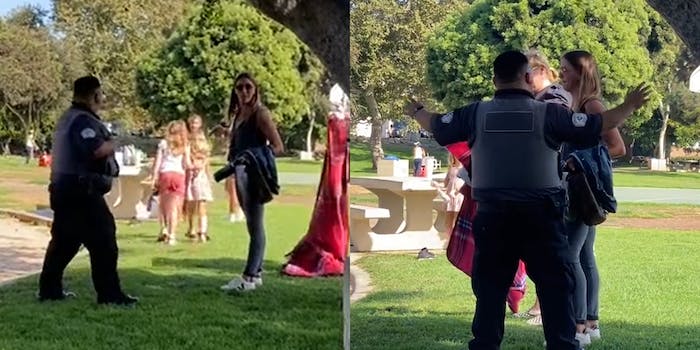 'My dog is around kids all the time.'

In a viral video posted Aug. 11, TikToker @dogmom1991m films two white women who allegedly called the police and her because she took her pit bull to the park.

“These ladies called the cops on me for having a pit bull at the park around kids,” the video caption says. “I was minding my own business; he was on a leash.”

The women, who the TikToker calls “Karens,” are seen talking to the police about the dog and gathering their belongings to leave.

“The people who are following the rules here are packing up,” one of the women says in the background.

Due to the distance between the TikToker and the women, it’s difficult to hear exactly what the women are telling the police and their children about the situation.

Near the end of the video, the same woman accuses the TikToker of filming her children.

“Keep them inside,” the TikToker retorts.

The video has garnered 1.8 million views at the time of publishing. Comments on the TikTok are supportive of @dogmom1991m.

“Why can’t people just mind their own business?” wrote one commenter.

“I didn’t even hear your pit bark once this whole video,” wrote another commenter. The TikToker responded, “And he didn’t [bark] the whole time he never barks [in] public only at home because he still a protective dog”.

In a follow-up video, @dogmom1991m thanks TikTokers for support and asserts that her dog, a pit bull and shepherd mix, is harmless. The Tiktoker also posted a video this week showing how her dog calmly interacting with children.

“Most dog parks actually have a playground right in front of them,” she states, “My dog is around kids all the time.”

@dogmom1991m did not immediately respond to the Daily Dot’s request for comment via TikTok.