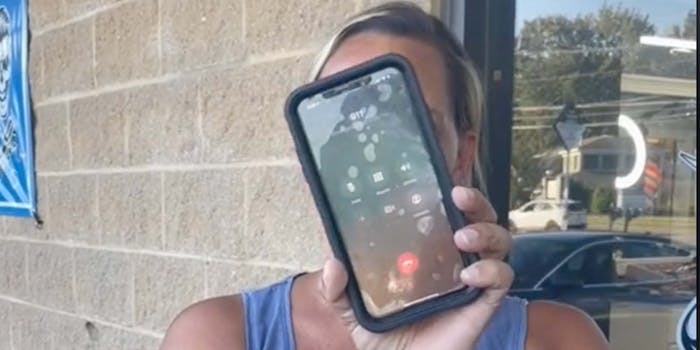 ‘Look at this lady, wasting my day’: Barber says Karen called 911 because he gave teen a ‘bad haircut’

In a TikTok posted on Monday, a woman calls the police on a Massachusetts barber, allegedly because he cut her teen son’s hair “too short.”

“Look at this lady, wasting my day,” user @RobbietheBonehead says in the TikTok. “For a bad haircut that I gave her son. That he asked for.” In the caption to his video, @RobbietheBonehead, who works at Boneheads Barbershop, called the woman a “Karen.”

The woman tells the police that she wants @RobbietheBonehead to get away from her and then walks away from him.

In a follow-up to the video, @RobbietheBonehead explains that the woman’s son, 17, came to his barbershop and requested a “high and tight” cut. The teen also requested that the top of his head be cut down with a No. 2 clipper.

“I literally stop and go ‘bro, a No. 2’s real short,'” says @RobbietheBonehead, who clarified that he asked again if the teen was sure.

@RobbietheBonehead says after the haircut, the son said nothing and tipped him.

“Twenty minutes later, his mom comes busting in the door,” @RobbietheBonehead says. According to the TikToker, the teen’s mom said she was going to sue the barber and that she’d “see him in court.” That’s when she called 911.

Many commenters were upset by the woman’s misuse of the emergency phone number.

“Karens always trying to get a free cut,” commented @richard_cypher_rahl.

Boneheads Barbershop did not immediately respond to the Daily Dot’s request for comment via email.