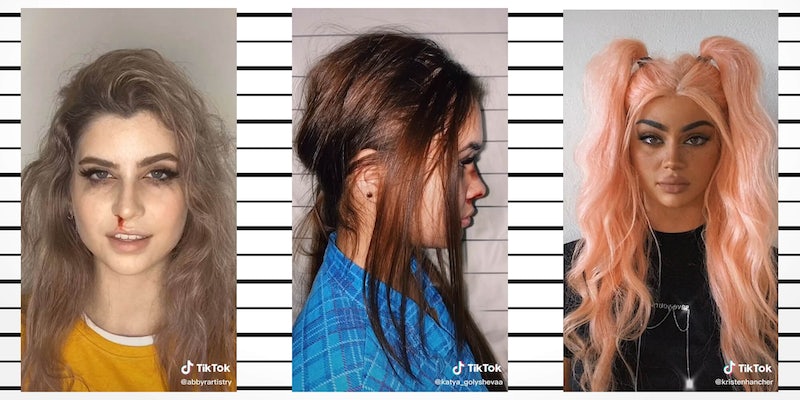 What is the TikTok mugshot challenge?

Influencers like James Charles have been called out for staging their mugshots.

The “mugshot challenge” is the latest tone-deaf fad to circulate on TikTok, and it involves participants staging what their mugshots might look like. You know, if they had really great lighting and makeup when they were arrested.

The challenge quickly saw backlash, mainly because the stagings involve makeup that makes it appear the participants have been physically assaulted, and many of the participants are popular, white influencers engaging in oblivious roleplay. YouTuber James Charles was called out this week, after posting two “mugshot” photos showing black eyes and a bloody nose.

What is the mugshot challenge?

The trend picked up momentum last week and was popular in TikTok beauty influencer circles. Makeup artist Abby Roberts posted a clip showing smeared mascara and fake blood on her nose, with the caption, “what would i be arrested for?”

It only got more ridiculous from there, as people tried to look impossibly hot in their mugshots. Of course, the existence of Twitter feeds showcasing “hot mugshots” doesn’t help.

And some people tried to recreate celebrity mugshots.

According to Insider, a variation on the TikTok mugshot trend went viral in March, with users posting compilations of real mugshots. This apparently gave way to TikTokers staging their own. The #mugshotchallenge hashtag has more than 124 million views on TikTok.

More popular participants were called out for portraying physical abuse as a trend; the mugshot challenge went viral around the same time as a domestic abuse POV trend, which is even more tone-deaf at a time when women and men are trapped at home with their abusers during a pandemic and isolated from friends and family.

YouTuber James Charles was perhaps the most high-profile callout. After deleting his mugshot challenge photo, he tweeted that it was “never my intention to trigger anyone” but then asked why the cover of The Weeknd’s new album wasn’t getting the same backlash. Charles also downplayed that the trend had anything to do with domestic abuse, though his post had no context or caption, leaving it wide open for criticism.

Other people rightly called out the trend for “glamorizing” incarceration and minimizing the experience of those who are far more likely to be assaulted or killed by police and unfairly detained.