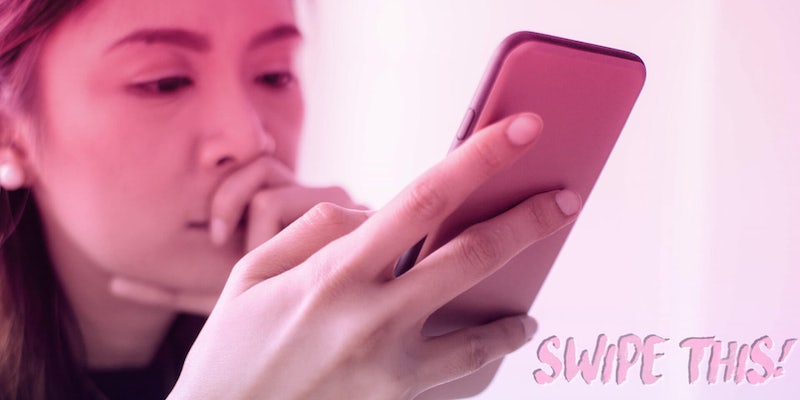 Swipe This! I found out he’s cheating on his girlfriend. Should I tell her?

A few months ago I went on a first date with this guy. We had great chemistry. There was definitely a steamy makeout. But when our second date rolled around, I talked to him about what I’m looking for (something serious, that could lead to marriage and a family), it didn’t seem like we were on the same page. He said he was dating around, etc. I made it clear to him that I didn’t want a “hook up” situation. He said that was fine and we could just be friends. But then his texts became more flirtatious and overtly sexual. Over time I would warm up to the idea of seeing him again, and since the chemistry was great we would end up getting hot and heavy all over again.

So now I’ve been seeing him on and off for the last few months. He follows me on Insta, and I follow him. A couple of months ago, I noticed a girl on his Instagram stories. I asked him if they were dating. He said absolutely not. He swore she was just a friend. But then, this weekend, he posted an IG story of the two of them on vacation in Napa!

I am furious. They are definitely more than friends! I did some investigating on her Instagram and it looks like they have been dating for several months! In fact, it’s possible they were already dating when we went on our first date! I called him out on it right away and I gave him the chance to come clean to her. But I could tell he ended up bluffing to save face. Which made me even angrier!

Now I feel like I have to tell her. I know if it were me, I would want to know that the guy I’ve been dating for months is a low-down dirty cheater! But some of my friends have warned me to stay out of it. Mostly they are worried about protecting me because they think she may have a bad reaction, get angry and blame me. I feel like, in light of #MeToo, that is so old fashioned! Shouldn’t there be a #LadyCode? Can’t we all look out for each other?

I wish I could tell you your story surprises me, but unfortunately, this guy’s behavior is pretty run of the mill. People who cheat rarely admit to their wrongs. It’s not shocking that he tried to cover up his lie (“I’m not looking for anything serious!”) with another lie (“She’s just a friend!”). And I’m in no way surprised that he kept lying to you and his ex when you gave him the opportunity to confess. Technology has made it easier than ever to sneak around, but it’s also made it easier than ever to get caught. I’m glad you followed your spidey senses and found out the truth for yourself.

This doesn’t diminish the fact that this guy was a total jerk to you. His behavior isn’t surprising, but it is wrong! And I can imagine how frustrating it was for you to state a boundary repeatedly only to have it disregarded over and over again. He charmed you and seduced you, and I bet he sent you subtle hints that you were so alluring, so desirable that all your passionate exchanges might lead to the serious thing you stated you were looking for from the start. I can imagine that right now you might feel used, betrayed, and devalued.

It’s no surprise to me that you’re feeling angry—and perhaps a little bit vengeful. You posed a question about looking out for a fellow woman, but let’s address the totally natural urge you’re feeling for revenge: He did you dirty and you want him to pay! It’s human to hunger for justice. But, as your friends have pointed out, reaching out to his girlfriend could lead to more hurt. She may not choose to believe you. Or perhaps she will—only to have him woo and charm her into giving him one more chance. If you’re not attached to the outcome, that may not bother you, but I have a suspicion you feel a deeper sense of injustice.

You brought up #MeToo, and I hear you on that. It does feel like we’ve begun to say no to so many of the ways our boundaries both physical and emotional get transgressed, and yet there are times that we still feel complicit. So I can understand why you’d want to speak up. You shouldn’t feel any shame about this situation, and you shouldn’t have to carry a secret for anyone, especially not one that harms you.

If you look at how “justice” plays out in the modern world, we typically expect that crimes should be met with punishment. But the flaw in this system is that punishments often do little to repair the harm caused. For example, if you look at our prison system, we often spend tons of taxpayer money to jail those who have committed crimes. While there are certainly cases of prisoners who go on to improve their lives and become law-abiding citizens, there are also many who grow bitter, who get lost in the system, who harden and who continue to perpetuate harm whether it’s in jail or outside of it. Sometimes, in the pursuit of justice, we get caught in a cycle of blame and harm. We don’t look to the root cause, and so, it never gets repaired.

Personally, I am a fan of restorative justice. Restorative justice shifts the focus away from punishment. Instead of asking how we can make the person who did wrong pay, we ask how can we repair the harm that was caused. Ideally, this terrible dude would make amends to you and his girlfriend and take accountability for his wrongs. But you can’t control him, and I definitely would not advise you to wait around for someone who’s proven himself to be selfish and unaccountable to do a complete 180. Instead, I’d look to ways you can repair the harm that was caused to you.

One thing that stands out to me is that you said you only wanted to date if it could lead to something serious, and yet you crossed your own boundaries when he came back. You say you dated on and off for months, so it’s possible you blurred your own boundaries repeatedly. I’m not saying you should judge or blame yourself. But I do think it’s worth looking at how it made you feel to let him charm you back into bed. What did you sacrifice in those moments? And now that you know how that feels, how can you reclaim your power going forward?

I think it’s easy, especially when dealing with someone who is intentionally charming and manipulating, to get addicted to external validation. I can imagine that he made you feel very excited, and you got a little rush from knowing he just couldn’t stop thinking about you. He just couldn’t stay away! But I also bet you felt a devastating crash every time he fizzled or disappeared on you. There’s no harm in enjoying attention or sexual chemistry. And there’s nothing wrong with having a casual hookup if that’s what you’re looking for. But you wanted someone to build something serious with you, so you shouldn’t have to settle for someone who shows you anything but that.

I think you are 110% entitled to your anger. I think your anger is healthy. I’ve addressed this in previous columns, and I think it’s relevant here again. As my old therapist told me, anger is a form of love for yourself. It’s a part of you that says, “No! I deserve better than this!” So I’m glad you’re leaning into your anger and letting yourself feel it in all its white-hot glory!

I also think that if we hold on to anger it can become toxic. We have to let it flow through us and guide us to actions that come from a place of love for ourselves. Otherwise, it sits and rots. So listen to your anger. If it’s telling you to speak up, speak up for what you feel is right. And if it’s telling you to wipe your hands of this mess, feel free to walk away. But whatever you do, do it with love for yourself.