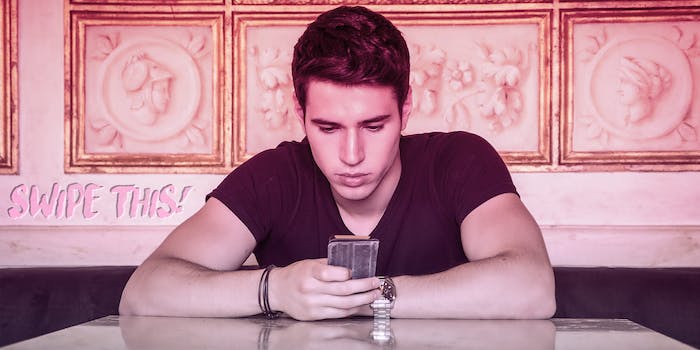 Swipe This! I want my boyfriend to text me everyday. Is that crazy?

There is nothing crazy about noticing the parts of you that need love and affection.

A few months ago, I met a really great guy on a dating app. He’s handsome, funny, smart, and so kind. He’s the best guy I’ve dated, hands down, and I kind of can’t believe my luck. Online dating is usually such a mess and I’m amazed at how well we clicked from the start.

Last month he told me he wanted to be exclusive. I was so psyched! I am usually the one to push for commitment, so it was so nice to have someone else initiate the “talk” for once! Since then it’s been great. He plans romantic dates and we spend lots of time together on weekends. But we both work a lot during the week and sometimes when we’re apart I don’t hear from him as much as I’d like to. If I don’t text him first, he might go a day or more without texting me. It’s almost like now that we’re “serious,” he’s reaching out to me less. Which confuses me, since he was the one who wanted to be exclusive in the first place! I feel like if you’re dating someone seriously daily contact is normal. I don’t know if this is too much to ask, but I want him to text me every day. Am I crazy? Do people have committed relationships where they just go for days at a time without talking?

I realize people have different texting styles, and I don’t want to place unfair expectations on him. But texting actually matters so much to me. When I hear from him it makes me really happy to know that he’s thinking of me. Isn’t that supposed to be one of the benefits of being in a relationship? I like getting little doses of affection each day, and normally I like giving that same affection to my partner. But right now getting so little from him makes me feel like I can’t reach out as often. And then I feel like I’m not even being myself. Like if we are in a relationship, why do I have to play texting games as if it’s early stages? The whole thing just makes me feel really crazy and stupid!

I know the easiest thing would probably be to tell him what I want, but I feel so awkward bringing it up. Everything has been so good so far and this feels like such a small dumb thing to pick on. I don’t want to rock the boat, but I also don’t want to get stuck in a relationship where I can’t ask for what I want! I’ve dated guys who turn out to be emotionally unavailable, and it sucks. I don’t want a partner who is really distant. I’m also scared that if I do ask, he’ll tell me he doesn’t want to have to text me every day. And if I get upset or can’t let it go, he’ll think I’m crazy for not being able to let this go.

What should I do? Is it reasonable to just tell him that I need a daily check-in? Is that an insane request? Should I just let him set the pace and get used to texting him less? He is truly such a great guy, and he’s nice to me in every other possible way. I don’t want to ruin a good thing over something so trivial! Help!

Am I Asking Too Much

Dear Am I Asking Too Much,

When I was 16 years old I read Naomi Wolf’s The Beauty Myth, and it broke my brain wide open. Prior to reading it, I had never considered all the ways society was telling me I had to live up to a constructed standard of beauty. Sure, my mother had warned me against the influence of fashion magazines. But it had never occurred to me the ideals of beauty were designed to oppress me. I realized I had been living outside of my own body, observing it, judging it, and even, in my harshest moments, hating it. And, armed with my new knowledge about not only the patriarchy but fat and all its necessary functions (Shiny hair! Smooth skin! Sexual arousal!), I realized could choose instead to step inside of my body and experience it as a space of pleasure, strength, and joy.

You didn’t talk to me about your body or any insecurities in that area of your life, so why am I going off about this? Because I believe you are trapped in another of the many myths that limit the ways we can live and connect in our modern world. If I could give you a magical book that might help you break the chains of your own bondage right now, it would be titled The Crazy Myth.

I don’t think you are crazy. Not by a long shot. But I think you, like many women, have internalized the misogynist notion that women’s feelings and desires must be routinely questioned, controlled and restrained. You are allowed to feel what you feel and want what you want—and you are not crazy for it.

But you know what will drive you to the brink of insanity? Pretending your desires don’t exist. Denying your feelings, especially to a person with whom you want to share an intimate connection. Calculating the exact perfect amount of initiating texting and waiting to be texted first to ensure that a person you like and desire will keep liking and desiring you back for the guaranteed future. None of these are signs of insanity, but they will make you feel like you’re losing your mind. I guarantee it.

You say you’re dating the best guy ever. That’s fantastic! I love that he initiated a conversation about commitment and that you found you were on the same page. So if you can talk about the big things, what’s so dangerous about talking about the small things? Perhaps it feels more nebulous. There’s more to negotiate. Realizing, “Yes, we both want to be in this relationship,” is a big simple yes. Untangling your texting habits and what works best for both of you might feel a bit more complicated. But, it doesn’t have to be, so long as you start from a base foundation of trusting your partner and trusting your own desires. If you are looking to him to validate your wants, to say ‘yes that’s reasonable,’ you might end up in a hot mess. But if you can step into this conversation with confidence about what you prefer and why you prefer it, I don’t think this conversation has to be a messy one at all.

In my estimation what you want is really simple: daily affection. For you, texting is a simple, easy way to show and receive affection. It might feel vulnerable at first, but saying how you like to show and receive affection is a healthy building block in any relationship. And, while you’re afraid that your partner will judge you or your preferences, for all you know, he will be very relieved that you can simply name them. So many partners are at a loss for how to show their significant other affection or care. The fact that you can identify your preferences is a gift to you and your partner. You are so afraid of being hurt, but put simply, when you open up to your partner about this need, you’re offering him a tool he can use to love and support you. Don’t mistake it for a weapon.

And what if he doesn’t see it your way? What if he can’t meet your needs immediately? Well, I think you are afraid of that outcome because you are unsure of the validity of your own wants and desires. It isn’t really about him or whether he can meet you where you are. It’s the deeper, creeping kind of fear we feel when we start to believe that our needs are unreasonable and that they’ll never be met.

So before you approach your partner, I’d take some time to get in touch with your beliefs about what you are allowed to ask for, not just in love, but in life. Do you have trouble asking for what you want? Do you order with confidence when you’re buying a morning coffee, or do you shrink back and lower your voice and avoid eye contact? Where, and under what circumstances, are you allowed to want what you want and ask for it?

It’s interesting to me that when we talk about feminism, so often the conversation turns to the wage gap, but we seldom have conversations about asking for love. We are allowed to ask for money. When a friend asks for more money and she gets a raise, we cheer for her. But why don’t we also cheer for the women and femmes in our lives who ask for love? Isn’t that also an act of bravery? Would the world be a worse place if we demanded more warmth, more affection, more tenderness on the daily?

Your partner is allowed to like whatever he likes and want whatever he wants—and so are you. I want to live in a world where you and all your girlfriends who text you daily are unafraid to ask for more. It could be a text, a phone call, a warm embrace, or the right amount of pressure and pace when a partner strokes your skin. Desiring and asking are healthy impulses, and they might not always lead to fulfillment. But just like waiting around hoping for higher pay is far less effective than asking for a raise, sitting silently wishing your partner would magically show you more affection is equally ineffective.

One of my favorite quotes from The Beauty Myth delves into what would happen if women loved themselves enough to ask for more.

It’s true what they say about women: Women are insatiable. We are greedy. Our appetites do need to be controlled if things are to stay in place. If the world were ours too, if we believed we could get away with it, we would ask for more love, more sex, more money, more commitment to children, more food, more care. These sexual, emotional, and physical demands would begin to extend to social demands: payment for care of the elderly, parental leave, childcare, etc. The force of female desire would be so great that society would truly have to reckon with what women want, in bed and in the world.

I agree with Wolf’s hypothesis. If women were unafraid to ask for more, the world would be a much, much better place.

So the next time you hear that little voice in your head say “this is stupid,” say “hush,” right back to it. There is nothing stupid about noticing the parts of you that need love and affection. The world needs love and so do you, and I’m so glad you’re working up the courage to ask for it.