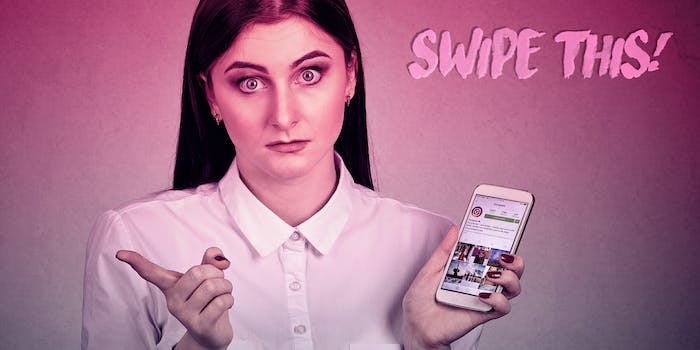 Swipe This! My ex is thriving on Instagram—and it’s making me miserable

A case for legally banning exes from the internet.

The other day, I did a dumb thing and looked at my ex’s Instagram. I know, I know, you’re not supposed to look at your ex on social media. And I didn’t for years, I swear! But my curiosity got the best of me and I did it. And now I really wish I hadn’t because he is positively thriving. It makes me so angry.

His feed is mostly pictures of him living his best yoga life (after we broke up, I started teaching yoga, and then suddenly he did too). He is always smiling, showing off his body in a challenging pose, and frequently, he is surrounded by hot women doing yoga alongside him. This guy was a terrible boyfriend and he hurt me a lot. And now, here he is just living it up. He’s even running (I’m a runner) and he always said he hated running.

I can’t shake this feeling that I got the worst of him and everyone else is getting the best of him. The hardest part is not thinking that the way he treated me was somehow my fault, like I made him “not good.” And now that I’m out of the picture, he’s morphed into this “good guy” and his life is just picture perfect. I thought he would end up sleeping in a park and he ended up doing acro yoga with hot blondes in a park instead.

I went such a long time without looking up my ex. I haven’t been in touch with him for years. I’ve had full-blown relationships since dating him. And I could give you a long list of all the reasons he was wrong for me. He broke my heart over and over again. He also abused drugs and alcohol. In a lot of ways, he was a mess I kept trying to clean up but couldn’t. And now it seems like he finally has his act together. But instead of feeling happy for him, I feel furious.

I just can’t shake this feeling that his life has magically blossomed in my absence. And it hurts. Why did he give me the worst and why is his life suddenly the best? Will I ever get over this?

I Thought I Was Over This

Dear I Thought I Was Over This,

If I had my way, all exes would be legally banned from the internet. That’s the only way I can see to create justice in this incredibly unjust world, and I’m telling you if I had the power, I would make it happen.

But seriously. There is something exceptionally cruel about living in a time where, in addition to doing the painful work of mending a broken heart, we have to resist the temptation to look at detailed holograms of our exes’ lives. It is all too easy to give in to that temptation. So if you feel guilty for giving in, please don’t. It’s not your fault. It’s just too damn easy to look up an Instagram account. If you’re blaming yourself for doing something “stupid,” please cut yourself a break. You’re not an idiot and you didn’t “ruin” anything by looking at your ex’s account. You’re simply human. And you gave in to the very human urge to trace your fingers over an old scar that you thought had healed completely.

What are we looking for when we examine our scars? Wisdom? Answers? Are we nostalgic for our own pain? Maybe it’s a mixture of all of these that leads us to trace the lines of ancient wounds. If I had to guess, I imagine you were looking at this scar because you are seeking some kind of guidance. The end of the year is a time when many of us take stock of where we’ve been and where we’re going. Maybe you are at a crossroads in your life and you are looking for a map. Maybe you feel uncertain or stuck, and in excavating your past, you were hoping that amid all the dirt, you might dig up something sparkly—a gem that would unlock the mystery of how to move forward.

But it sounds like when you touched your scar, instead of answers, you found pain that you didn’t know you still harbored. You say you got angry, and I think, at some level, that’s a healthy reaction. One of my favorite therapists once told me that anger is a form of self-love. When we get angry, it’s as if we’re saying, “No! I love myself and I deserve more than this!” So embrace the part of you that’s angry. She loves you and she wants more for you.

Often partners who abuse drugs and alcohol leave us feeling emotionally abandoned. If this ex hasn’t done much to repair the ways in which he hurt you, it makes sense to me that images of him finding satisfaction or success—especially in activities that are so near and dear to your own heart—would infuriate you. How dare he be happy! How dare the sun shine down on him!

Whether or not he’s actually thriving is debatable. Instagram is a big old illusion, and very few people are posting things that represent an accurate portrait of how they feel on a daily basis. Maybe he has, in fact, turned his life around. It’s also possible he’s still a private mess but is quite skilled at curating an image of the kind of person he’d like to be. Either way, I can completely understand how all these details would add fuel to the fire. And I think it’s OK to listen to that fire inside of you that says, “Hold the fucking phone, Mr. Namaste! You weren’t exactly an enlightened angel when you ripped my heart out and munched on it for a snack.” It’s OK to feel that seething hunger for justice.

Although, I can’t tell you what’s real or what isn’t real in your ex’s life, I can tell you that people who treat us unfairly never do so because we deserve to be treated poorly. If your ex is better, it’s not because he isn’t with you, it’s because he’s done his own work to heal and recover. Sometimes seeing someone so recovered is shocking. We look back at all the pain and chaos we experienced with that person and we wonder if we had it all wrong. Were they actually innocent? Were we the monster? I can tell you, very confidently, that you weren’t. This is just your brain trying to make sense of something that feels illogical. So please resist the urge to turn this anger in on yourself, please do not put yourself on trial. Please don’t imagine that you are bad or wrong or that his mistreatment was somehow a reflection of you or your faults. You aren’t and it wasn’t. I promise.

That said, I don’t think you’ll soothe your rage by examining all the ways your ex wronged you for evidence that he was the monster, either. I think what you’re asking me when you ask, “Will I ever be over this?” is how do I stop obsessing? How do I let this go?

Whether your ex is a monster or an ascended yogi master, he isn’t the person who’s going to give you closure or a sense of peace. And his Instagram feed is never going to sate your hunger for justice. And you’ll never get it by putting his life or yours on trial for signs that everyone has gotten their just desserts.

So let’s step back from this compare-and-despair territory for a moment and take another look at your scar.

You felt a love, and a pain, so powerful with this person that it cut you open. And then you healed. You became whole again. You built new relationships. You grew into new versions of yourself.

Your scars don’t want you to feel trapped by your past. They want you to know that you are fucking magical. In a moment where you may be uncertain of what might come next, your scars are a reminder that you know where you’ve been. And no matter how challenging the road ahead might be, you’re made of something strong enough to endure it all, and soft enough to welcome it in.

So have a good scream if you need to, my angry darling. And then open your arms wide to the big unknowable future and know that when the road does get tough, your scars will be there to tell you, You’ve got this, you magical beast.