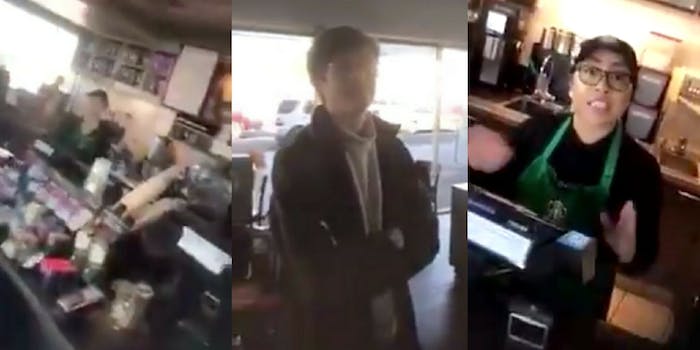 'Is it because of my skin color?' the Black man blatantly asks.

Online rage against Starbucks continues after another video depicting racial discrimination by baristas has gone viral.

The video, taken by a Black man and shared on social media by activist Shaun King, appears to show baristas allowing a white man to use the Los Angeles store’s restroom without purchasing anything, while the man taking the video says he wasn’t allowed to do the same thing.

When he approaches the baristas and tells them what he suspects, “Is it because of my skin color?” he’s asked to stop recording, then soon asked by a barista who identifies herself as the store manager to leave the store.

Meet Brandon Ward. He was @Starbucks – about to make a purchase – and needed to use the restroom.

They denied him the code.

He then finds a white man, Weston, who came out of the restroom.

He had not made a purchase but they gave HIM the code.

The video comes less than one week after Starbucks patrons filmed two Black men being arrested at a Philadelphia location for waiting for a friend and attempting to use the restroom without purchasing anything, then being told they had to leave. The men were not charged by Starbucks, with company CEO Kevin Johnson stating he would apologize to the men personally, as well as review training procedures to implement implicit racial bias training.

Across Twitter, users, including actor Gabrielle Union, pointed to the video as a clear example of racial discrimination.

For those who insist "theres gotta be more to the story…" Nope just the usual racism https://t.co/IqFfzIVGCU

Hey @Starbucks are you keeping track of all these rules because it's starting to get a little tricky to keep up. So not only can you not wait on someone while black, but now you can't pee while black. Do you guys have a sign or…. https://t.co/yDd6u6P7HX

Activists also can’t help but note that the two videos evoke the fatal last moments of Dontre Hamilton, who was killed outside of a Milwaukee, Wisconsin, Starbucks in April 2014. Hamilton, who lived with mental illness and had been treated for schizophrenia, had been sleeping outside of the Starbucks, in the general area of the business park, when an employee called the police on him.

Two officers checked on Hamilton and determined he was doing nothing wrong, but a third responding officer shot Hamilton 14 times after Hamilton had gotten ahold of his baton during a pat down. The 2017 documentary The Blood Is at the Doorstep follows the Hamilton family and their activism for the Black Live Matter and justice reform movements following his death.

Remember, the police shot Dontre Hamilton 14 times after Starbucks employees called the police on him for sleeping in a park. https://t.co/O2qVBIb9pa pic.twitter.com/gSVkygDmKf

Internal Memo #Starbucks CEO Kevin Johnson to employees addressing racial bias incident in Philadelphia. "We will learn from this and be better." This 4 years after #DontreHamilton had cops called on him by sbucks in #Milwaukee and shot 14 times. arrest photo: @patsjazzpix pic.twitter.com/Z6QaUI52Ak

According to USA Today, King nor the man filming the video in the L.A.-area Starbucks, Brandon Ward, could be reached for comment and did not provide context regarding then the video was filmed. However, the Starbucks manager who called the police on the two Black men in the Philadelphia store has since left the company.