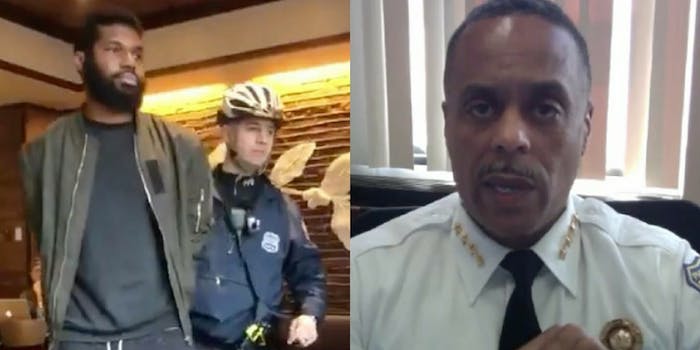 He said officers are actively trained on implicit racial bias.

Philadelphia Police Commissioner Richard Ross is standing by the officers who arrested two Black men who were waiting for a friend at Starbucks. On Saturday, Ross stated in a Facebook Live video that the officers did “absolutely nothing wrong,” and that they were responding to a call from the Starbucks that the men were trespassing.

According to the police department’s account, police were told by Starbucks employees that the men “refused to leave the establishment” after they attempted to use the restroom and were told to leave. Ross said the police were confronted “with the same type of attitude” as when employees threatened to call police. He went on to say that police at the scene were told by the men, “‘You don’t know what you’re doing, you’re only a $45,000 a year employee,’ or something to that regard.”

Ross stated later in the video that a Philadelphia officer had once attempted to use a Starbucks restroom without purchasing anything and was also denied access, which he said indicated that the company is consistent in its policy.

The incident went viral Saturday after author Melissa DePino recorded a video of the arrests and posted them to Twitter. DePino pointed to racial biases held by Starbucks employees, as she and other white patrons hadn’t received similar pushback at Starbucks locations before for “loitering.”

Starbucks CEO Kevin Johnson has since apologized for the employee training that led the employees to call the police, and said it would review its policies.

We apologize to the two individuals and our customers for what took place at our Philadelphia store on Thursday. pic.twitter.com/suUsytXHks

Ross, who is Black, addressed the idea of profiling in his video. “I will say that as an African American male, I am very aware of implicit bias. We are committed to fair and unbiased policing, and anything less than that will not be tolerated in this department,” he said.

After detailing the department’s implicit bias training, the commissioner did say that the incident reinforced the need for the department to expand its body camera program, as the responding officers did not have body cameras on them.

Watch the entire statement from the commissioner below: